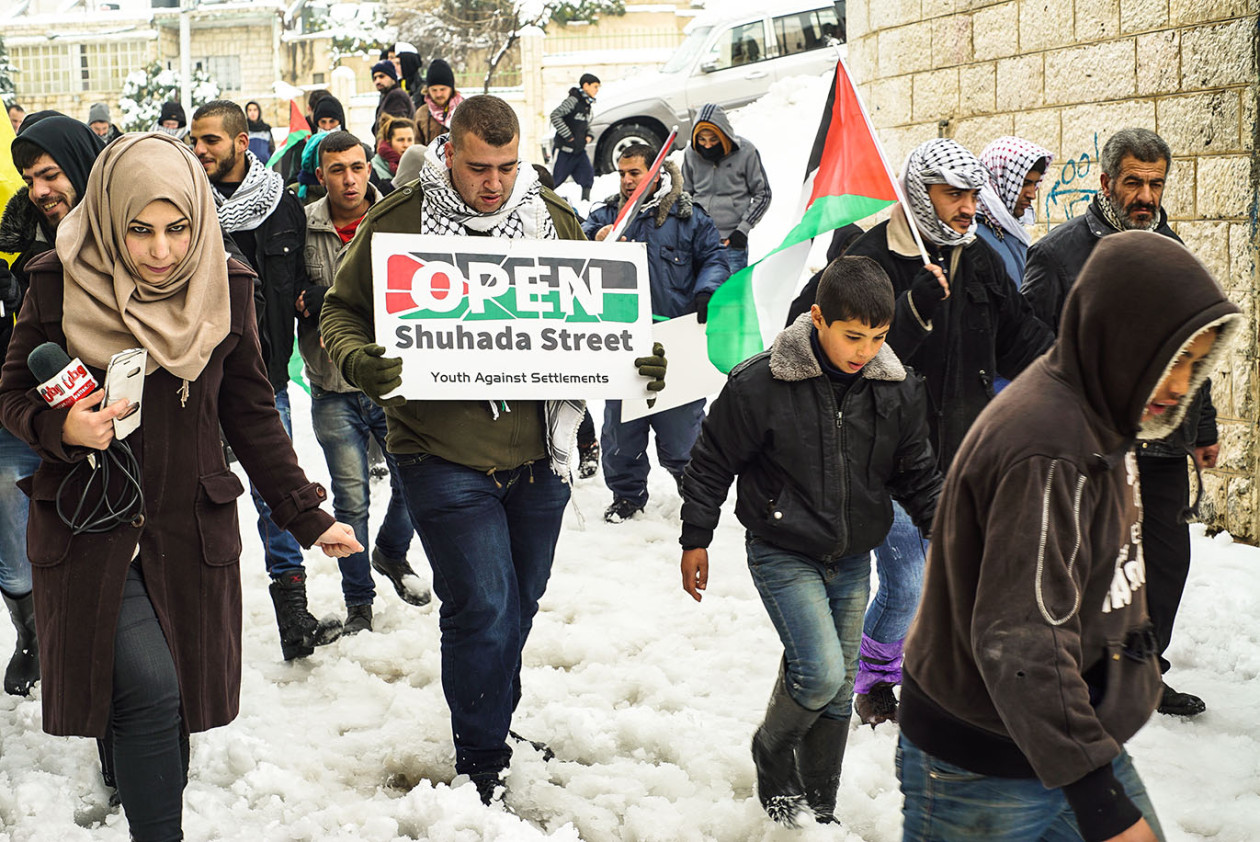 Despite the heavy snow and the cold weather, Palestinians of Hebron gathered on Friday 20 February to remember those killed in the Ibrahimi Mosque massacre and demand the opening of Shuhada Street.

On 25 February 1994, Baruch Goldstein, a US-born Israeli settler, walked into the Ibrahimi Mosque and murdered 29 men while they prayed.  Israeli forces killed an additional 29 Palestinians during demonstrations, and subsequently restricted Palestinian access to Shuhada Street, a major market street in the Old City.  Shuhada Street has been permanently closed to Palestinians since 2006.  Palestinians in Hebron live with the effects of these actions every day.

For years, Palestinians have protested this restriction on their freedom of movement. Israeli military forces and Border Police attacked nonviolent demonstrators with tear gas, sound bombs, skunk water, rubber bullets and live ammunition. Last year, Israeli soldiers fired teargas and sound bombs fifteen minutes after the nonviolent protests began.  Youth Against Settlements (YAS) was the main organizer for this Friday’s protests. Earlier this week,  Israeli forces arrested Issa Amro, a lead organizer with YAS.  Although he was quickly released, this arrest was clearly an attempt at intimidation on the part of the Israeli Border Police.

The demonstration this Friday began at the Ali Baka mosque, which lies close to the line between the Palestinian-controlled H1 area and Israeli-controlled H2 area in Hebron. After prayers, Palestinians and international solidarity supporters marched to Shalalah Street and up to the Israeli military gate in the square at Bab Al Baladiyeh, the entrance to the Old City. This gate blocks off a street that connects Bab Al Baladiyeh with Shuhada Street, and is guarded by a military outpost. This gate has been there for over a decade and is one of the many closures that bars Palestinian access to Shuhada Street.

Just a few minutes into the nonviolent demonstration, Israeli forces began to bombard the protesters with sound bombs and teargas canisters. One Palestinian and one international activist passed out because of excessive tear gas inhalation. Palestinians persevered in trying to reach the Bab Al Baladiyeh gate, but they were continually pushed out of the square by soldiers who pointed their guns at children and adults.

Several young Palestinians attempted to observe the demonstration from nearby streets, however, soldiers repeatedly pointed their weapons at these young people and threw sound bombs and tear gas into narrow streets to disperse onlookers. IDF soldiers and riot police also fired teargas at international journalists attempting to document the protest.

The action lasted about an hour and a half, and finished around 1:30 pm with the march retreating to the square at Bab i-Zawiyah and then dispersing. Clashes between Palestinian youth and armed Israeli forces ensued in that area, but did not last long. Israeli forces responded to youth throwing stones in exactly the same manner as they had responded to the nonviolent protesters.

Next Friday, Palestinians in Hebron are planning more nonviolent demonstrations against the closing of Shuhada Street.