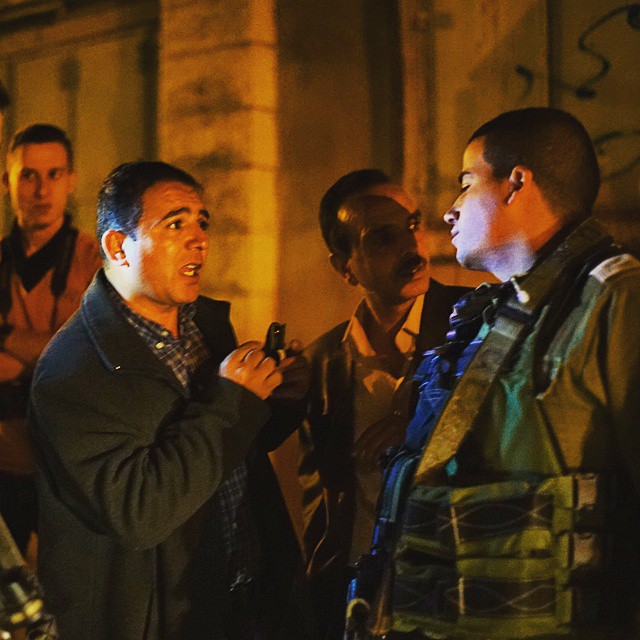 The month of May saw an increase in settler violence in Hebron’s
Tel Rumeida neighbourhood, where Palestinians live in close proximity to aggressive,
ideological Israeli Jewish settlers.

On 9 May, a Palestinian woman and her two children from the
Abu Shamsiyeh family in Tel Rumeida were on their way to go shopping.  Settlers attacked one of her children.  A Palestinian man pushed the settlers away
from the crying Palestinian child, which made the settlers furious. They wanted
the Palestinian man arrested for “pushing a settler.” When soldiers did not
arrest the Palestinian man, the settlers started harassing people and attacked
a Palestinian woman trying to film the incident. The harassment went on
for over an hour, during which they spit at and pushed people. The soldiers
prevented many people from going to their homes. When the woman returned
from the shop a while later, soldiers did not allow her to go home for quite
some time.  The International Solidarity
Movement (ISM) documented the incident on video and wrote a full report. Read
the report and watch the video here.

On 16 May, a group of settlers attacked the Abu Aisha family
and soldiers arrested 19-year-old Ashraf. According to his father, Taysir,
settlers told the police that he grabbed a pipe and was going to hit them, when
in fact, they were the ones who hit Ashraf with the pipe. Soldiers saw the
settlers following them and attacking the Abu Eisha family, however, not only
did they neglect to do anything, but they stood by the attackers. Taysir and
one his relatives gave an interview to CPT concerning the incident. Watch the
video here.

On 17 May, settlers attacked Mervat Abu Eisha.  The family
thought she was pregnant because she lost so much blood (the hospital later
said she was not pregnant, but had significant blood loss.)

On 23 May, settlers in Tel Rumeida attacked the Azzeh
family, who live just below the settlement caravans established in 1984. During
the morning, settlers parked a vehicle in front of the family house entrance,
leaving only a tight space to pass through. Later, settler children aged ten-twelve
threw stones at the family and international volunteers. The daughter was hit
and while she was showing the footage of the incident to soldiers, they accused
her of stone throwing and were about to arrest her. At the same time, settlers
again started throwing stones, this time at the family’s home, and the soldiers
left to “check.” The soldiers did not come back and never reprimanded the
settlers, much less detained or arrested them for stone throwing.  Soldiers have arrested Palestinian children
as young as five years old for stone throwing, even though according to Israeli
law it is only legal to arrest children when they turn twelve.  ISM was present during the incident. Read the
full report here.

This increase in settler violence in Tel Rumeida comes at
the time that most right-wing coalition government in the history of the modern
nation state of Israel has formed. High levels of impunity for settlers has
been a reality since the start of the settlement project in the Occupied
Territory, and the prospect for this impunity to decrease seems unlikely at the
moment.

Your support helps the people of Tel Rumeida know they are not facing this violence alone: https://www.cpt.org/participate/donate