[The following piece has been adapted for CPTnet.  The original is available on the CPT-Palestine’s website.] 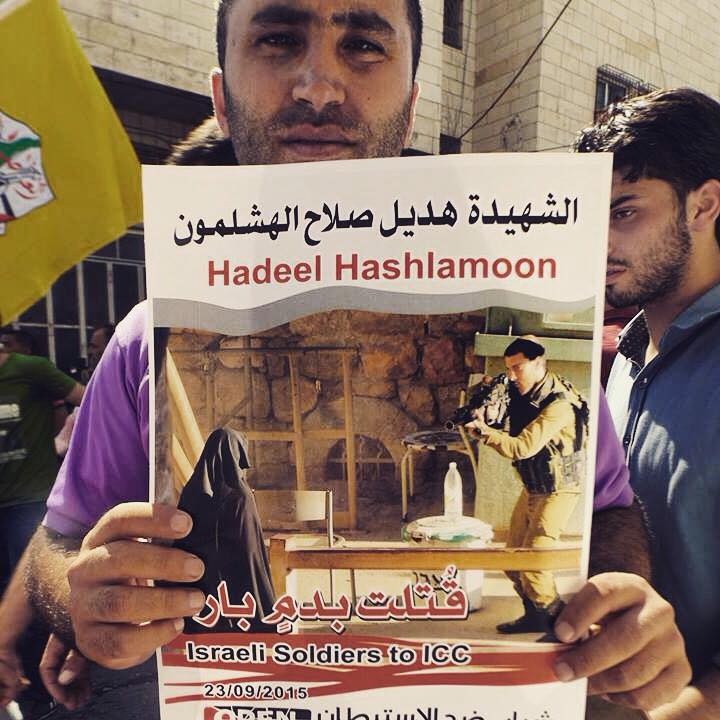 Hadil Hashlamoun (18), a first year student at Hebron University, was shot dead
by Israeli forces at Shuhada checkpoint in Hebron on Tuesday morning (22.09.15).
She and her family lived in the H1 region of Hebron.

Fawaz
abu Aisheh (34), a resident of the Tel Rumeida neighborhood was attempting to
usher children from the scene, while translating the orders shouted in Hebrew
by the Israeli soldiers at Hadil.

He explained, “They were screaming at her, “Move back! Move
Back!” I knew
she couldn´t understand so I intervened in Arabic …She was terrified…She
listened to me immediately when first I spoke with her, but they moved me away
and continued to scream at her in Hebrew which she obviously didn’t
understand.”

Official Israeli military reports state that Hadil attempted to
stab a soldier, which all eyewitnesses refute.

Abu Aisheh said, “She was covered completely, there was no
knife showing at any time. Even if she did have a knife he could have arrested
her so easily. I was there… I could have talked to her; she cooperated with me
in that very first moment. I asked her to move, and she moved. But after that I
begged [the soldier] to let me talk to her, but they took me away from her, and
started pointing their weapons at me. After they shot her more, and more
soldiers arrived, there were still three or four kids a few meters from the
checkpoint, so I moved the kids away. ”

Other
eyewitnesses from human rights organizations report that amongst the shouting
one soldier opened fire, shooting her in the leg, before other soldiers
encircled her and joined in the fatal shooting. A Palestinian ambulance soon
arrived, yet medics were prevented from reaching Hadil.  Soldiers let Hadil bleed on the pavement for
half an hour before they allowed an Israeli ambulance to take her away. A video shot
through the turnstile at the checkpoint shows Israeli settlers, gawping
and smirking at Hadil’s body, photographing her slowly dying on the ground,
before Israeli soldiers roughly drag her out of camera range by her feet across
the ground, head banging on obstacles.

When CPTers later arrived on the scene, CPTers witnessed the
deployment of a bomb-disposal robot to destroy Hadil’s bag. There was no bomb.

It appears that the presence of her burqa at the checkpoint reduced her
humanity to ‘suspect’ or ‘terrorist’ –enabling the soldiers, as is clear in the
above video, to treat her as nothing more than rubbish.  We mourn with Hadil’s family that her life
was so brutally taken away as a result of the racism, hatred, fear and violence
inherent to this occupation.

In this context of horrific violence, with Hadil’s life and
body treated almost as though she herself were a bomb that needed disposing of,
the words of Palestinian writer, lawyer and activist, Raja Shehada, ring
viscerally true:

“We the Palestinians are
terrorists and therefore anything they do to us is legitimate.  We are
treated as [those] to whom the laws of the rest of humanity do not apply…
denigrat[ing] a human being into a mere object, a mere body, and a toy to which
things can be done?  So the Palestinians …dubbed terrorists… can be
killed, disposed of like flies by the army’s big machines without a second
thought.”

We continue to pray, hope and act for change of this
reality.

For a just peace for all Palestinians so violently denied
their humanity by this dehumanizing and brutal occupation.