AL-KHALIL (HEBRON): No safety for Palestinian children walking to school in Hebron 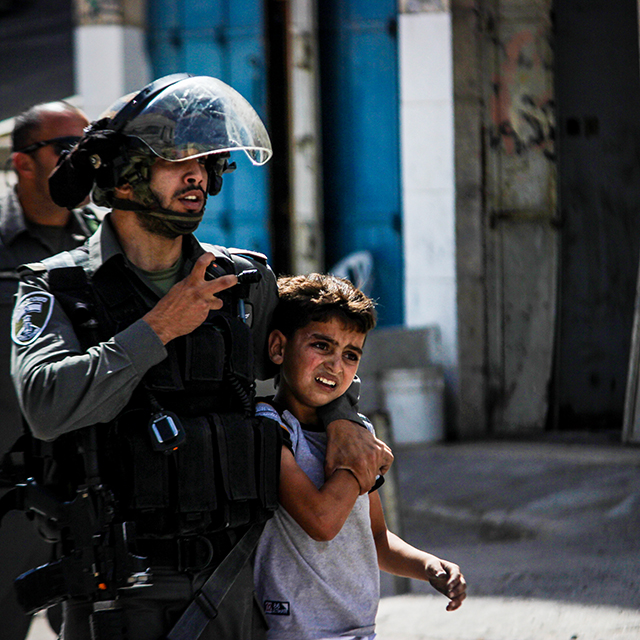 [The following release has been adapted for CPTnet. The original is available on CPT Palestine’s website.]

In the first ten days of
October, Israeli forces fired more than 143 teargas canisters, as Palestinian children
walked to and from school, as well as five stun grenades, from two military
checkpoints (approximately 0.3 miles apart) in the H2 section of
Hebron. On two of those ten days, Israeli forces also fired rubber-coated
steel bullets into a crowd of children (one killed 13 year-old Ahmad Sharaka near
Ramallah this week). Two Palestinian children in this area were hospitalised as
a result of excessive teargas inhalation on their walk to school on 12.10.15.

In the past week, Israeli
forces ambushed and arrested two boys aged 11 and 12 after school on 13.10.15
(see video and full account here).
Article 37 of the Convention on
the Rights of the Child, states that child arrest is in clear
violation of human rights law.

The presence of school
children does nothing to deter the Israeli military from this relentless use of
teargas, stun grenades, rubber-coated steel bullets, detention and arrest.  They are entirely preoccupied with a
collection of those children, occupied, harassed and humiliated their entire
lives, throwing stones at the heavily armed grown men occupying checkpoints and
rooftops.

One Israeli Border Policeman
recently told CPTers that the Israeli military supposedly “keeps the children
safe”, and that “the little ones can go to the school safely.” Soon after,
another Border Policeman fired a steel-coated rubber bullet into a crowd of
small boys throwing stones at a soldier on an occupied rooftop who felt so
little threat he was wearing no helmet. Meanwhile the day before a total of 81
teargas canisters had been fired in a similar scenario at this checkpoint
(Qitoun). See video here.

Such military repression
is far from abnormal in H2 Hebron. However, as physical and fatal violence has
intensified in these tense first two weeks of October—during which 30 Palestinians have
been killed by Israeli forces, 1300 have been
injured by live ammunition and rubber-coated steel bullets,
with four Israelis killed and 67 injured by Palestinians.  Other forms of military repression have also increased,
evident in the increased use of physical force and child arrest at school time.

In this context, the
little ones, as young as the four-year-olds we walk to kindergarten– cannot
walk to school safely as a Border Police
man told a CPTer they could. In fact, one of our little friends we
walk to kindergarten had to hold his jumper over his nose to avoid the sting of
teargas as he left his home on Monday this week. Firing over 143 teargas
canisters, five stun grenades, rubber-coated steel bullets and arresting minors
is, however, supposedly the Israeli military’s approach to safety when it comes
to Palestinian children.