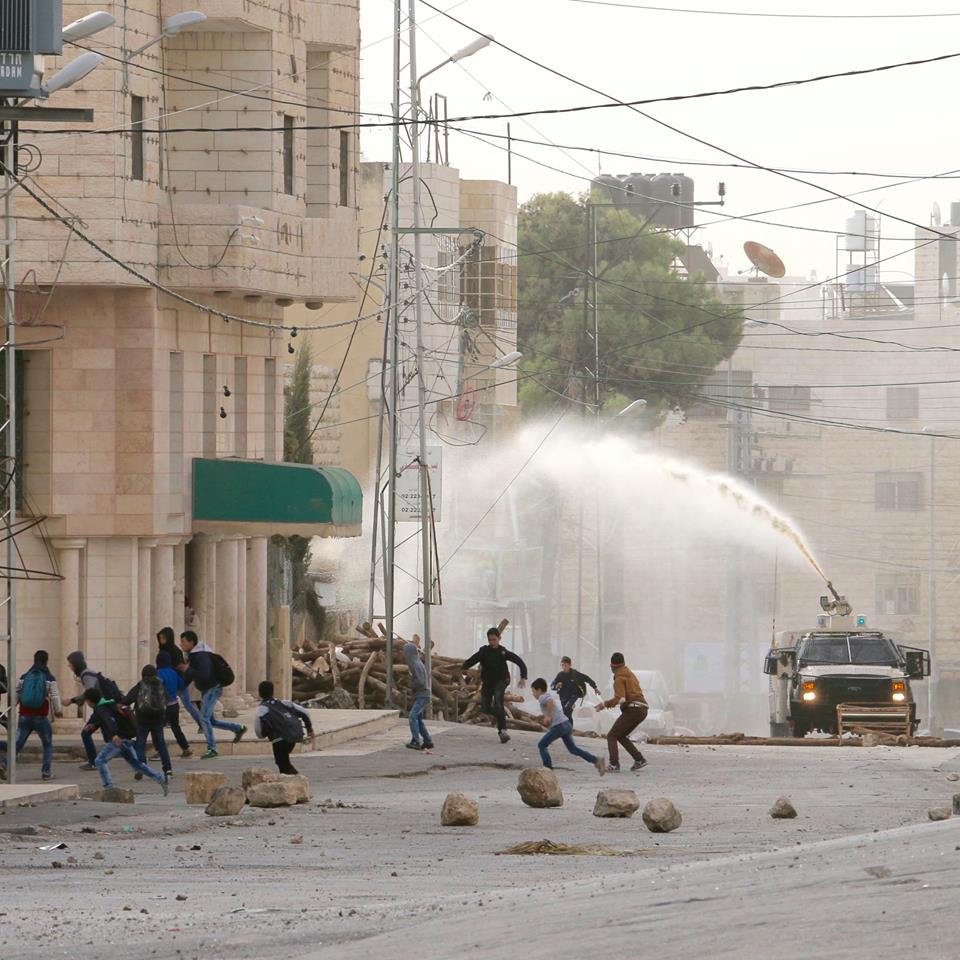 Israeli forces sprayed
skunk water on children, homes and streets in the Qitoun neighbourhood of
Hebron on two school days in the first week of November. On one of those days,
a Hebron settler arrived shortly before the event, prepared to film this foul
smelling act of repression. See videos here and here,
and photos here.

Odortec, the Israeli
company that created skunk water, advertises that “the overpowering odour of
the Skunk drives rioters away” and that it “can be sprayed over a large area
using a standard water cannon.” Bizarrely, Odortec even claims that this
vomit-inducing substance, which smells of a mixture of decomposing animal
carcass and raw sewage, is “100% eco-friendly,” “organic,” and “perfectly safe
to consume.”

Regardless of whether or
not skunk water is indeed “perfectly safe to consume,” The Israeli military’s
use of it implies that
they view Palestinian schoolchildren as ‘rioters.’

This policy of ‘driving’
Palestinians schoolchildren away is also made clear in the Israeli military’s
relentless use of teargas at school time, shown in these videos here and here,
shot in the same week as the video links above.

The Israeli state stands
by the ‘morality’ of skunk water, legitimising its use
as ‘non-lethal crowd control,’ supposedly minimizing “the necessity
for the use of live ammunition.”

However, when did it
become ‘normal’ for soldiers to regard children heading to school school as a
crowd for controlling? In what other context does a state that is purportedly
democratic celebrate not using live ammunition on children walking to school?

Yes, a handful of
Palestinian school children throw stones at the checkpoints of occupation that
litter the city of Hebron, and all of Palestine. However, at what point was it
deemed acceptable for children to be subjected to the daily oppression of checkpoints,
facing the harassment and humiliation of searches, stops and checks, along with
the threat of arrest,
teargas, stun grenades, skunk water, rubber-coated steel bullets and live
ammunition?

Stone throwing appears to
be the Israeli military’s go-to rationale for the daily repression administered
against Palestinian children. Yet, schoolchildren throwing stones at occupied
rooftops and checkpoints rarely place fully armoured Israeli forces under any
physical threat. This lack of threat is particularly clear when Israeli
soldiers do not even see the need to wear helmets, and also make provocative
hand gestures at the children, shown in this video here.
The act of stone-throwing in this context is predominantly a sign of
frustration: their frustration is patently clear in this video and
the photo below in which school children throw stones at the armoured skunk
truck.

Sometimes, people ask CPTers
‘what would happen if children didn’t throw stones?’ Yet we don’t think this
question goes far back enough. Surely, the question should be ‘what would
happen if children didn’t have to walk through checkpoints to reach school?’ or
‘what would happen if all children were afforded equal rights on the basis of
their humanity, rather than segregated, oppressed and terrorised on the basis
of their ethnicity?’

Skunk water or tear gas, as long as the children are walking to school,Christian Peacemaker Teams – Palestine will be walking with them. You can walk with them too. https://www.cpt.org/participate/donate