Pray for the people living in Afrin, Syria as they face NATO backed
Turkish bombings.  Pray that that the
Kurdish people in Afrin face the invasion of their homeland with courage.  Pray for the wounded that flood local
hospitals and the workers that treat them. 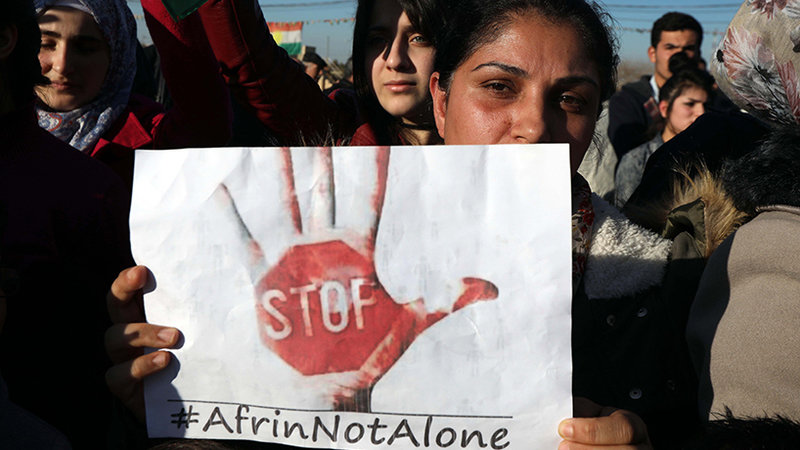 Afrin is a newly formed canton known as Rojava, which is
part of Democratic Federation of Northern Syria with a majority Kurdish
population. It continues to be bombed by Erdogan, President of Turkey, who
launched the Olive Branch Operation on 20 January 2018. Erdogan has claimed
that his mission is to secure Turkey’s borders from Kurdish militias and he plans
to move the Turkish military to Manbaj, Syria after conquering Afrin and the
rest of the newly formed Kurdish democratic region Rojava. This operation is
bombing civilians and their livelihoods, wiping out hospitals, schools and
homes. Recent reports indicate the use of toxic gas in Afrin, where six people
have been hospitalized. Afrin Canton’s population is more than 500,000 people
and it hosts around 120,000 Internally Displaced Persons (IDPs) who have fled
the lengthy war in Syria.  Reports
indicate that the Turkish invasion and bombing have resulted in the
displacement of 17,000 people, numerous deaths and casualties as well as mass
destruction that will require decades of rebuilding.  The people of Afrin have been seeking
international solidarity to stop another war, while Syria has been struggling
with a bloody and protracted war more than seven years. However, there has been
too little response and all the international powers have turned a blind eye to
the atrocities and the genocide that Erdogan is committing. We ask everyone to
help the people of Afrin in these difficult times to stop another genocide and
war in Rojava (The Kurdish Region of Syria).