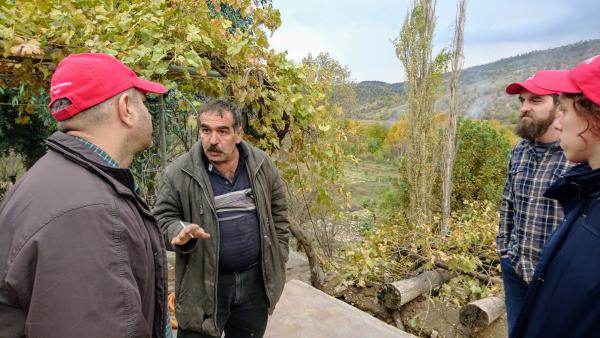 Pray for the safety of the fourteen families that live in Chame Rebatke, an Assyrian Christian village, that Turkish warplanes bombed twice in two months. Pray and advocate for the end of the cross-border bombardments that target farming and pastoral communities in Iraqi Kurdistan.

On the night of 3 September, a Turkish rocket shook the village of Chame Rebatke, landing just outside village limits on a mountain a few hundred meters away. The entire village woke, and all families came out to see what had happened. Five minutes later, another Turkish rocket struck within the village breaking windows, causing structural damage to buildings, and shaking the ground beneath the feet of the villagers. The impact of the rocket caused people to fall to the ground because of the explosion’s wave. One villager close to the point of impact fell, and if he had not, “shrapnel would have wounded or killed him,” Zeya, the village leader, told CPT. The missiles destroyed the villagers’ sesame crop, resulting in a loss of income that families rely on for the entire year.

On 9 November, Turkish warplanes bombed Chame Rebatke yet again, this time in a field even closer to the homes.

Since the bombings, many people fear to leave their homes and be seen by drones flying overhead. The trauma of the Turkish bombing causes children to fear loud noise, such as the sound of a door slamming.

But the villagers continue tending to their fields. When CPT visited Chame Rebatke again a week after the second bombing, Mr. Zeya told the members of the team, “We continue farming, but our hand is on our hearts, that is our reality.”

Learn more about how the villagers of Chame Rebatke have been impacted after the first bombing here.