A proud campesina has dreams for her people 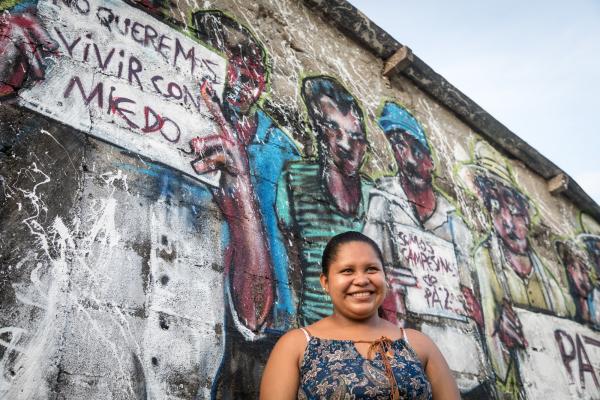 “We don’t want to live with fear” / “We are campesinxs of Peace”. El Guayabo community has endured the scourge of
paramilitarism and insurgency, resisting with creative nonviolent strategies. Now, a new generation of leaders arises.

There is a pace for justice. And Justice, which is something different from the justice of the courts, has it own pace. Both the big and the small have a complex, difficult, sometimes elusive and even utopian relationship in the context of an armed conflict. Colombia is deeply marked by more than 50 years of conflict, which have shaped the present through violence, fear and coercion. While justices travel at their own paces, life can slip through our fingers.   It happened to Teacher Henry from El Guayabo, when a rabid cancer took his life before either justice, big or small, even showed its face.

Young Colombians have a difficult task in this long and painful road of building peace with social justice, rebuilding collective memory and truth, and healing wounds. Some of them take an active role in their communities and are involved in organizational processes of resistance to violence. The campesino community of El Guayabo resisted the paramilitary scourge and the insurgency, and they deal with the institutionalized violence of the state that violates rights and ignores needs, stigmatizing campesinxs¹ and community leaders.

“I am proud to be a campesina and to be called a campesina, I would never regret being so, nor do I feel ashamed to say that I am a campesina. We, the campesinxs, feed the cities.” María Fernanda – Mafer (19) – was born and raised in El Guayabo, into a family with strong leadership in the region, she now shines as one of the young leaders of El Guayabo with creativity and courage.

“We are fighting peacefully and resisting, so that they do not take us off of the land. It is important to tell how we have remained all this time in our territory, where there has been so much violence. We use a machete, not to kill anyone but to cut a yucca bush, or a bunch of plantain. Never for violence. That’s why I would like to tell our story so that many people would realize that we are good people and that they should not call us guerrillerxs.” ²

The Peace Agreements of 2016 brought a respite of hope, a renewal of the profound will for peace of the Colombian people who prefer not to hide the scars left by all these years of violence, nor the wounds that violence continues to open. During 2018, of the armed conflict’s 331 acts of violence, 65% directly or indirectly affected children and teens³. Statistics show an increase compared to the previous year. For Mafer, since the signing of the Agreements the situation worsened: “There is more war; there have been many evictions and abuses against us campesinxs.”

The pressure of private interests and the disrespect for the lives of the forgotten are expressed in the form of corruption and institutionalized violence, widening the gap between the two justices. “We have realized that the authorities are not on our side, not even the Mayor’s Office,” she says. “If they do not want to be on our side, that’s fine, but they should be neutral. We can have a good lawyer but the only one who can change everything is God, because there is so much corruption here. ” Thus it is difficult to maintain hope. “I do not know what will become of us; I see that it is getting worse. I am very concerned as a young person in the community; I am worried about what is happening. But I’m going to keep fighting; this is not over. My challenge is to continue fighting and achieve what we all want, which is the land.” Where the State is absent or corrupt, grassroots organizing flourishes.

In 2017 she finished high school and dreamt of going to university. But a violent eviction of their cultivated lands cut short that dream. The humanitarian crisis prevented her family from supporting her. She applied unsuccessfully to the national scholarship system, even though she belongs to the vulnerable populations, prioritized by the system. “They say there are many opportunities but in reality they are only for those who have leverage,” she says. The crisis is not over, but she hopes to start her studies this year. “I want to study Law, but my parents do not have resources, so I had to sign up for something else and I’m going to study Psychology. My community needs a good lawyer and nothing [would be] better than a lawyer from her own land, who has suffered and fought with the campesinxs. And not only for El Guayabo but for the country, for the people who need it.”

Let us hope Mafer can study what she desires. The only certain thing at this moment is that she will work hard for the two justices to become one and, in the meantime, she will tighten her fist so that life does not slip through her fingers.

¹ Campesinx is a gender inclusive noun for subsistence farmers

² Guerrillerx is a gender inclusive noun for guerrilla combatant, often times used in a derogatory way to stigmatize and criminalize social leaders