COLOMBIA: The slow struggle for land and justice 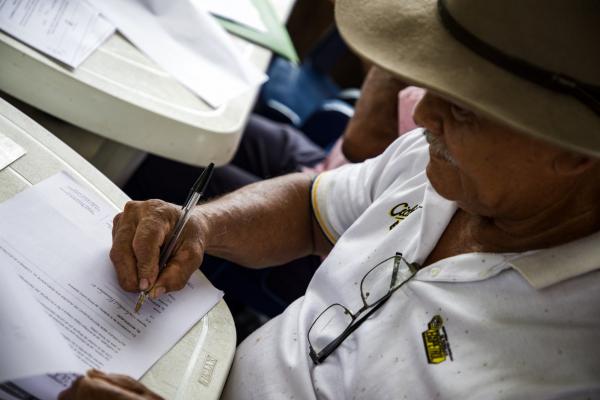 “Since 2005… no, since 2002 we are fighting on this land,” Eugenio tells me when I ask him about the history of the process and struggle that has led to this day. We are sitting in the shadow of the church building in El Garzal, watching the people come and go to register their land with the ANT (National Land Agency). Eugenio has fifteen hectares of land in Nueva Esperanza, the neighboring community to Garzal whom CPT also accompanies — “poquita,” (“little”) he says. He cultivates plantain, mango, coconut, yucca, rice and more, but mainly for self-subsistence. Because of threats, extortion, and having to pay protection money to paramilitary groups Eugenio had to flee to the nearby town of Puerto Wilches for three years. One of his compañeros even has been disappeared. After three years of displacement, Eugenio returned to Nueva Esperanza and today he has walked the three kilometers up the road to Garzal to register his plot of land to eventually obtain an official title for it.

The details of the process are confusing for the campesinxs* and even the accompanying organizations themselves because, strictly speaking, there are three administrative processes and at least one judicial process going on at the same time, when people try to claim ownership of their land. The land title process alone already consists of several steps and is going to take more than a year. This week, the ANT has come to define borders between state land and private property, which mainly affects those who have land bordering on water, be it the river, lakes or territory that only floods during the rainy seasons. Naturally, some campesinxs have come misinformed, don’t possess land close to water and now feel frustrated. But the majority is carefully optimistic and appreciates the accompaniment of all the entities and organizations present. In addition to the ANT, CPT and Peace Watch, a Swiss international accompaniment organization, have come. The Defensoría del Pueblo, who is there as well, is a state institution established to protect human rights, especially those that have been violated the most as a consequence of the armed conflict: children’s and women’s rights as well as campesinx rights, i.e. land rights. The Defensoría del Pueblo has accompanied the Garzal case since 2004. And last but not least, CPT’s partner organization Justapaz who helped the whole process move forward again after a long time of standstill, stepping in last year by filing a claim against the ANT. Justapaz also helps Garzal and Nueva Esperanza in their community processes by discussing together what the community wants and making plans together on how to achieve that.

When communities must fight so long for their land — in this case over seventeen years—in many cases people eventually start leaving, moving to the cities or giving in to the pressure and selling their land. This attrition has happened in Nueva Esperanza and Garzal as well. Often, that’s how large landowners gain even more. “It’s the grand dilemma of this country that the powerful have the possibility of everything,” explains Pastor Salvador, the main leader of the Garzal community. “In concept we are all equal but because of the situation of resources today there exists a stratification so that whoever doesn’t have money is here and whoever has money has all the access to the institutions and justice.”

The concentration of land in the hands of a few big entrepreneurs is only one side of this problem. For the campesinxs this means living isolated and abandoned by the government. Because of the lack of infrastructure and state support it doesn’t pay to bring the products of one’s land to the next town because transportation costs more than the money the fruits would bring in. For that reason especially in the mountains many campesinxs turn to planting coca. “Coca damages the social fabric of the country immensely but it serves to survive. The state is responsible for this situation,” says Pastor Salvador matter-of-factly.

Katherin, another campesina who comes from Garzal, is one of only two women in the joint committee of Garzal and Nueva Esperanza. She also addresses the issue of missing services from the government by complaining how hard communication is without cell phone signal. Talking about her feelings towards the meeting with the ANT she says, “The process is quite delayed, I’m a little worried.” For the future she wishes to have her titles and papers and to live without problems. She hopes for a liberated land.

Land is the big political issue around which not only the armed conflict of the past decades revolved but also what most of the current conflicts are about.   Currently these conflicts involve multinational companies, the discussion about fracking and cases of land grabbing. It is for this exact reason why a slow and bureaucratic process at first sight might seem utterly unspectacular — but when after seventeen years of resistance Pastor Salvador somberly sits down to sign his registration papers, victoriously raises his fist and starts laughing, it becomes clear that only step-by -step the land can be returned to the people.  And that return IS spectacular.

*Gender-inclusive form of the Spanish word for farmer