Palestine: The Camera as a Lifeline 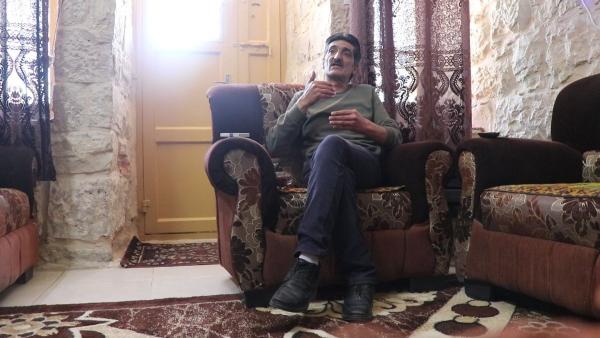 Emad Abu Shamsiyah in his home

The neighbourhood of Tel Rumeida is located in the H-2 zone of Hebron, an area exclusively under Israeli military control.  An Israeli military base lies nearby currently operated by the Israeli Givati brigade. The unit largely serves to provide backup for Israeli settlers who have taken over many Palestinian homes and buildings in the area and consolidated the occupied property into two major settlements. Despite these incursions, 240 Palestinian families remain in the area trying to survive.

Palestinians can reach Tel Rumeida from the city center only through Israeli military checkpoints. In order to cross these checkpoints, they must carry an ID card with a number specific to their neighbourhood. Residents are often subjected to unnecessary and humiliating delays at the checkpoints: ID checks, bag and body searches, not to mention the frequent harassment they face in their own neighbourhoods from Israeli settlers who act openly in the interest of expanding their colonization project.

No one is safe from this strategy of intimidation and harassment. Community members have been attacked physically and verbally by settlers and soldiers, hit by cars or even shot, their homes and property damaged or demolished, and children harassed on the way to school.  The settlers can call upon Israeli soldiers and border police to reinforce the systemic abuse, apprehending Palestinians and invading homes at will. How do these people survive here among these Israeli settlers, heavily guarded by their “Big Brother,” the Israeli military?

Emad Abu Shamsiya is a well-known activist and inhabitant of Tel Rumeida involved in filming human rights abuses perpetrated by the Israeli settlers and military. These events happen regularly here. For instance, Emad once filmed an Israeli soldier’s brutal execution of a Palestinian man who had been shot down earlier as he lay helpless on the ground and after Israeli emergency services had denied him medical assistance. That video led to the conviction of the Israeli soldier who fired the fatal shot, but put Emad and his family in the spotlights as well.

Needless to say, filming human rights abuses involves great risk to those who shed light on the crimes taking place in occupied territories. After Emad released his video to the press, Israeli soldiers and settlers immediately targeted him and his family. “You can’t imagine what the fear was like” he says. “They burnt my home six times. They’ve poisoned my water.” Many have left the area, but Emad is determined to stay. Most incidents of violence here still go unnoticed by the media. And how will the world know what Israeli Occupation in the West Bank really looks like if no one dares to film it?

As Emad’s video gained international attention, Palestinians in his own community started to take interest as well. More people started to recognize the importance of the camera as a tool to record the reality of the Occupation. Men, women and even children went to Emad for advice on getting cameras and how to use them. Soon Emad started receiving invitations from schools to educate students. To date, more than fifty children have attended his workshops.

Emad has developed his own approach to educating communities. He has taken part in trainings for trauma healing and incorporates this into his workshops. For Emad, “A camera is like the soul of life. It’s a way to bring back life into this place and yourself. You don’t use it only for recording crimes, you can use it too for recording moments of joy and happiness in your own life.” He describes the idea of becoming sensitive to “…the two faces of the camera.” The act of photographing or filming allows people to take action in representing their own experiences rather allowing hardship to overwhelm them, as well as offering an opportunity–a lens–to capture the beauty of the neighbourhood.

The participation of so many community children is particularly powerful. In Tel Rumeida, there is little space and freedom for children to play and no after school activities, thirteen-year-old Saleh, one of Emad’s youngest sons, explains. Other children, even those in the neighbouring -1 area governed by the Palestinian authority, are lucky: “…they have no checkpoints, they have playgrounds… there is actually no Occupation.” In reality, children in Tel Rumeida can hardly play soccer on the street without patrolling Israeli military or border police stopping them.

In an environment where a normal childhood is under attack, and most community events centre around protests and demonstrations, taking photos and videos is a welcome creative outlet. For Saleh, and others a camera provides not only a means to provide evidence of a harsh reality, but purpose and hope for life beyond the Occupation.

You can witness more of Emad and his family’s experience, and their involvement with CPT partners, Human Rights Defenders by watching the BBC documentary, Hebron Exposed: A Weapon of Life, released January 2019.