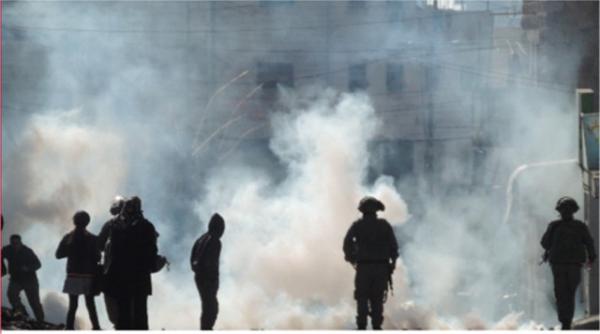 We* were monitoring the Salaymeh checkpoint on a cold morning. Two soldiers, fully armed and wearing masks, walked passed the checkpoint and went up on the roof of an adjoining building. As children started making their way to school, the two soldiers came down and started moving towards the school area. Ofer, a settler who shows up daily at the checkpoint to harass children and human rights monitors, made his daily appearance. Suddenly, soldiers threw three sound grenades close to a small group of boys who had gathered outside the school. Within seconds children started throwing stones and throwing back the sound grenade canisters at the soldiers. Things quickly escalated. Schoolteachers and school principals were out on the streets. Then to everyone’s surprise, soldiers began firing live ammunition, five shots fired in the air. I could hear teachers and community members shouting in disbelief, saying, “ They have never fired live ammunition before.”  One teacher had videotaped the scene and was replaying the video as proof of what the soldiers had done.

In the midst of teachers and community members arguing about what steps they needed to take to diffuse the situation, the principal, of the boys’ elementary school, the only woman in the crowd, made her way to the growing crowd of boys and started bringing her students back to school one by one. She walked past the soldiers, past the sea of men debating and arguing and gently summoned her students. She knew she had to bring her kids back to school and back to safety.

No discussion, no debate; just action. Was she acting as a school principal or was she responding as a mother? I don’t know, but it was a beautiful and moving thing to witness.

That day was just another day in the life of schools in the Jaber neighborhood where soldiers fire sound grenades and tear gas several times a week. That particular morning, the vice principal told me that only 90 children out of 350 attended school.

*We do not attribute articles written by Palestine CPTers, because doing so might result in the Israeli government banning them from returning to join the team.