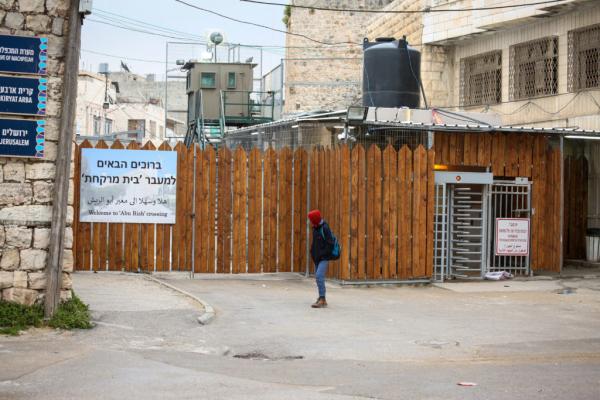 In April 2019, three major checkpoints (Bab al-Zawiyeh / 56, Salaymeh / 160, and Qitoun / 209) in the Old City of al-Khalil (Hebron) were surrounded with wooden planks and large signs saying, “Welcome to the Crossing” in Arabic, Hebrew, and English. The Hebron Municipality has shared a concern that these developments are likely a starting point for the privatization of these checkpoints. The danger of the Israeli military authorities turning over these checkpoints to the private security sector is that the Israeli authorities will regard them as official border crossings between two countries, and not as part of the daily route of Palestinians living in one city.

According to statistics by UNOCHA, there are around 800 roadblocks on the roads between Palestinian cities in the West Bank, Area C, and Israel. Israeli occupation forces operate 140 of these as checkpoints for vehicles and passengers, and there are twenty such checkpoints located inside the H2 part of al-Khalil (Hebron). These checkpoints are heavily militarized in order to control the daily lives of 30,000 Palestinians and protect 800 Israeli settlers—settlers who frequently attack Palestinians under the protection of Israeli soldiers.

In 2006, the Israeli government began a project of privatizing checkpoints by handing over control of some checkpoints to private Israeli security companies, such as Modi’in Ezrachi and Sheleg Lavan. When Israel privatizes checkpoints, the language surrounding it changes, as well. The privatized checkpoint is renamed a “crossing” or “station”; ID checks are called “services”, and Palestinians are referred to as “customers” or “passengers”. This different language results in changing the appearance of the military occupation to something more legitimate and benign.

Palestinian writer Amjad Arrar says that handing over the checkpoints to private companies will privatize violence. These companies are in the business of security, so the more ID checks, body searches, and other restrictions they carry out will demonstrate that they are meeting the goals of their security contract. Both the private companies and the individual employees feel pressured to prove that they are skilled enough to perform their job in the security business.

An example of how the capitalist security business plays out in the treatment of Palestinians is evident at the checkpoints between the Palestinian cities of Tulkarm and Qalqilya that Israel privatized. Mohammed Baraka, an Arab member of the Israeli Parliament, spoke about the attitude of employees of these private security companies when dealing with Palestinian workers who are crossing into Israel with legal work permits. Examples of restrictions include workers not being allowed to bring more than five pieces of bread, tuna canisters of more than 200g, or any kind of homemade lunches – all depending on the mood of the security employees. Baraka added that when these checkpoints and restrictions were in the hands of Israeli forces, those crossing through at least a place to object, but now with privatized checkpoints, the Israeli Security Agency (SHABAK) denies providing any kind of instruction and refuses to intervene.

The checkpoints in H2 al-Khalil (Hebron) and other parts of the West Bank are different in that these checkpoints are located in Palestinian neighborhoods and passing through them is part of many Palestinians’ daily routine. Therefore, the community is concerned that Palestinians will be dealing with increased body searches, bag searches, and ID checks, along with the potential for the checkpoint to closures during certain holidays.

Jamal Nofal, Deputy Director of the Palestinian DCO, says that most of the checkpoints between Israel and the West Bank have been privatized, and now these changes in H2 are significant in that it is a starting point for privatization. This goes against the Palestinian – Israeli agreement that states there won’t be any separation between H1 and H2, as this is a way to isolate the area and maintain a record of people who are living in H2. As part of the private sector, the companies will only care about security and will push their employees to perform their job completely. The Palestinian DCO objected to the privatization of checkpoints and told the Israeli administration that it cannot implement this change inside al-Khalil (Hebron).

Palestinians want to end the Occupation, not improve the conditions of it. In this illegal and abnormal context, their only demand is to be treated as humans and not as prisoners.

From 1 January to 15 May, Christian Peacemaker Teams-Palestine has observed at the following checkpoints:

Use of force: 9 incidents that included 74 teargas canisters, 42 sound grenades, and live ammunition.

Use of force: 3 incidents that included 30 teargas canisters and 29 sound grenades.