“We will start all over again”: Palestinians face a surge of home demolitions 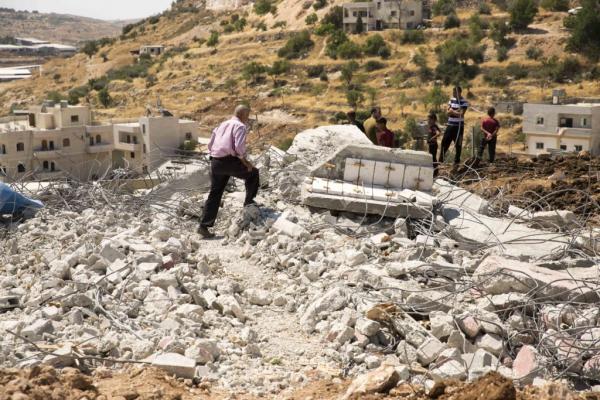 Early in the morning of 22 July, more than 1,000 Israeli soldiers and government workers arrived to Sur Bahir in the southern area of East Jerusalem and aggressively began the process of demolishing 70 Palestinian homes. Alongside the sheer magnitude of the destruction, these home demolitions were particularly concerning in that the Palestinian homeowners had permission to build from the Palestinian Authority, as Sur Bahir is located in Area A, and these demolitions could set a dangerous precedent.

Home demolitions violate universal human rights and attack the most basic necessity of any family – the need to have shelter and a place to call one’s own. Israeli Occupying Forces have a practice of not only demolishing family dwellings, but also the surrounding infrastructure, such as schools, water cisterns, and community centres.

During the month of July, Israeli forces have carried out six demolitions in the greater Hebron area, according to the Hebron Freedom Fund. On 10 July, Israeli bulldozers demolished a caravan in Idhna, a village just west of Hebron, claiming that the caravan was too close to Israel’s apartheid wall – the same reason given for the massive demolitions in Sur Bahir. On 11 July, Israeli forces issued a demolition order for the Hebron home belonging to Issam Tumaizy and an order to halt construction to Palestinian farmer Amjad Islaimaya, both with the reason that they did not have building permits. On 13 July, the Israeli military raided areas of H1 Hebron (under Palestinian Authority control), put up mobile checkpoints, and delivered a home demolition order notice to Mohammed Ali Al-Allami, despite Mohammed having all of the necessary legal documents for his home construction.

On 16 July, Israeli forces demolished an irrigation pool that the Ziad al-Jabari family used to water their crops in H2 Hebron, next to the Kiryat Arba Israeli settlement.

CPT recently followed-up with brothers Bara’ and Lafe al-Rajabi, whose home in the Jabal Johar neighborhood of Hebron was demolished by Israeli forces in June. “We have been here before,” they told visiting CPTers. Israeli military forces destroyed one of their large dairy farms 17 years ago. The brothers commented on their good fortune, compared with many other Palestinians who face demolitions, by saying that at least they still have their original home to live in, overcrowded though it is. The family is not homeless, and they still have each other. However, one of their main challenges is that after placing all of their savings into the construction, the family now has no money left to pay the bill that Israeli authorities presented them for the demolition. “We will start all over again,” they said. “But this time, we will save up for some of the more expensive land in Area A. We will make sure this doesn’t happen to us again.”

Demolitions have long been a tool of Israeli settler colonialism. According to the Israeli Committee Against Home Demolitions (ICAHD), Israeli Occupying Forces have demolished over 49,000 structures since 1967. Since 2006, Israeli authorities have demolished at least 1,440 residential units across the West Bank, causing 6,336 Palestinians to become homeless. The rate of demolitions has been increasing, according to UN-OCHA, with Israeli forces demolishing over 201 structures in Palestinian communities and displacing 295 people since the beginning of 2019. The rate of demolitions increased significantly in 2016, with Israeli forces demolishing an average of 14 structures monthly. The highest number of demolitions ever recorded in one month was when Israeli forces demolished 63 homes and other structures in April 2019. The most common reason given by Israeli authorities for demolitions is the absence of a building permit or license to build.  In reality, according to Oxfam, Israel denies more than 95% of the applications to build that come from residents in Area C—which includes the area around Hebron and the South Hebron Hills.  Since the lawyer’s fees, land survey fees, and paperwork for the application can cost thousands of dollars, Area C Palestinians living in overcrowded housing are in a lose/lose situation.