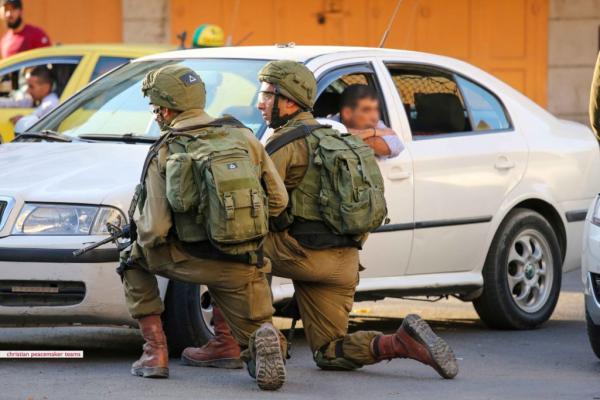 The Palestinian community of al-Khalil (Hebron) experienced widespread civil disruption on 4 September when incumbent Israeli Prime Minister Benjamin Netanyahu visited Hebron in a scheduled appearance at the Ibrahimi Mosque in the Old City.

An air of anxiety hung over al-Khalil during the week before the ceremony on 4 September commemorating the 1929 massacre of Al Khalil’s original Jewish community. Residents of Hebron expected that Netanyahu would be coming, but until the official announcement, they did not know for certain. The online homepage for the illegal settlements within al-Khalil announced that in addition to Netanyahu, Israeli President Reuven Rivlin, and Knesset Member Yuli Edelstein would be visiting.

In the days leading up to 4 September, the Hebron community witnessed military activity increasing in the area directly around the Ibrahimi Mosque and within the rest of the Old City in the form of military patrols and ID checks. Israeli Occupation Forces set up portable blockades in the streets around the Ibrahimi Mosque and erected multiple tents on the premises in preparation for the settlers and visitors that would attend the ceremonies.

On the day of Netanyahu’s visit, the city of al-Khalil was under nearly complete lockdown. The Israeli military completely blocked access through the Ibrahimi Mosque Checkpoint, and closed access to Salaymeh Checkpoint 160 and Qitoun Checkpoint 209 in the afternoon; the schools around the checkpoints closed early so that the students would not be in danger of military or settler violence. The Israeli military also closed access to the Ibrahimi Mosque itself and denied access to Muslims after 11:30 a.m., and closed the road connecting Kiryat Arba and al-Khalil (Hebron) to vehicular traffic after 4:00 p.m. Netanyahu himself gave his speech just after 5:00 p.m. from a tent set up by the settlers in front of the Ibrahimi Mosque.

Palestinians demonstrated throughout the afternoon and evening in the Bab az-Zawiya intersection, which is located about half a kilometer past the line separating H1 and H2 outside of the Old City per the 1997 Hebron Protocol.

Israeli soldiers exited from Tel Rumeida Checkpoint 56 into Bab az-Zawiya multiple times throughout the afternoon and evening over a period of about five hours. During one incursion into the intersection, the occupation soldiers stopped multiple cars, demanded the keys from the drivers and placed the keys on the roofs of the stopped cars while the drivers and occupants remained inside. The soldiers used Palestinians and their cars as shields while they occupied Bab az-Zawiya. At one point during the afternoon, an Israeli soldier fired live ammunition into the air as a warning to the Palestinian demonstrators in the area. In addition to live ammunition, Israeli soldiers fired sponge rounds into the crowd—a type of projectile that Israeli occupation forces classify as non-lethal, despite it having a demonstrated potential for lethality, especially if used at close range.  Fortunately, they hit no one. The Israeli military arrested two demonstrators over the course of the evening, both Palestinian men, one 19 years old and the other 21.

Netanyahu’s presence within the Old City and the widespread detentions and denials of freedom of movement that the Israeli military enforced in response indicate that the Israel considers Hebron to be under Israeli sovereignty, and is entirely indifferent to the suffering and restriction that its policies inflicts on the Palestinians.