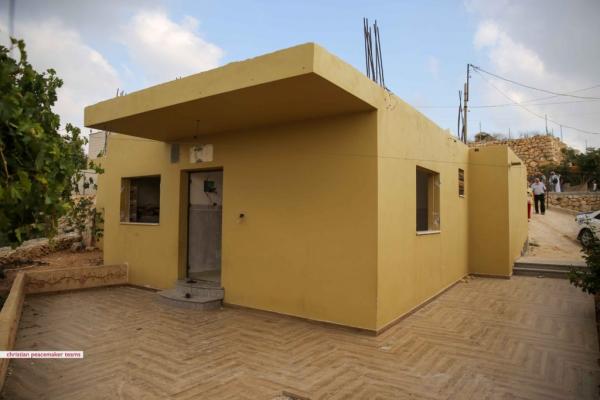 This single-family dwelling was measured and photographed by Israeli soldiers on
the night of 12 August.

This single-family dwelling was measured and photographed by Israeli soldiers on the night of 12 August 2019.  A Palestinian child gave CPT Palestine visitors a tour: “This was my bedroom. This was the kitchen where I helped my mother cook.”

The raids began happening after 8 August, when the Israeli corporal and yeshiva student Dvir Yehuda Sorek was found dead by the road leading to his yeshiva on the edge of Migdal Oz, an illegal Israeli settlement south of Jerusalem.

During those weeks of official silence, the Palestinian family (Assafrah/Zahur) in Beit Kahil near Hebron city suffered wave after wave of arrests, overnight raids, deprival of work permits, and categorical condemnations in Israeli mass media, without one word of official explanation from the authorities or opportunity to contact their arrested family members.

Two days after Dvir Sorek’s body was found, the resulting Israeli manhunt claimed its first arrests, leading to warm public congratulations to the Israeli forces from Prime Minister Netanyahu: “You arrested Dvir’s murderer within 48 hours… We’ve mapped the houses of the terrorists and will soon demolish them.”

Until the military court issued indictments on 3 October, the only information the anxious Palestinian family received came via mass media (in a superheated political campaign environment) and the human rights organization HaMoked. Newspapers originally identified the suspects as 24-year-old Nazir Assafrah and 30-year-old Qasem Assafrah. HaMoked provided the locations where the Israeli authorities were holding those they had arrested, and confirmed the issue of demolition orders for two apartments and a single-family dwelling.  The Israeli courts have not allowed the family nor lawyers contact with the detainees, nor have they permitted them to attend the secret detention hearings.

The members of this extended Palestinian family live within a few hundred meters of each other in Beit Kahil, some in the threatened apartment building and others in the nearby home also slated for demolition. Their extended nightmare began at 2:00 a.m. on 10 August, the eve of the Eid al-Adha holiday, when Israeli forces awoke them by breaking down their front doors, invading the women’s quarters, setting police dogs on the brothers sleeping on the multifamily roof, and dragging everyone into one room of each house. Terrified children screamed for their parents. The forces turned the houses’ contents upside down until 6:00 a.m., and arrested three men and one woman—the two men identified by the press as suspects, Nazir Assafrah and Qasem Assafrah, along with Nazir’s brother Ekrema, and Qasem’s wife Enas. They also confiscated Qasem’s car.

On 12 August, 2:00 a.m., the second wave began. Israeli forces raided both houses, conducting searches, as well as taking internal and external photos and measurements of the houses. Later that day, the Assafrah family learned of PM Netanyahu’s politically-timed public commitment to demolish their homes. They felt they had no choice but to evacuate Qasem’s and Nazir’s homes. When human rights observers visited, a child gave a guided tour: “This was my bedroom. This was the kitchen where I helped my mother cook.” When asked where his relatives were, he answered matter-of-factly, “They’re in prison.”

Adults in the family described other effects on the children. Aside from sudden displacement to relatives’ homes and the absence of loved ones, the children have frequent nightmares, and one has trauma-induced incontinence. They ask fearfully, “Are the soldiers coming again tonight?”

Third wave: 15 August. When Israeli forces entered the town, the Palestinians thought their arrival was a demolition raid and resisted the soldiers’ entry. The Israelis succeeded in getting to Qasem’s house, stayed for a couple of hours and then left.

The next blow came soon after, and had devastating financial consequences: the suspension and possible cancelation of work permits to cross into Israel. At first, the order affected three extended family members, but the number impacted has since grown to sixty as of this writing, including not just family members but also others in their Beit Kahil neighborhood. With pervasive unemployment in the region, this extended Palestinian family now depends on odd jobs, primarily construction day labor, and the income (on a reduced schedule) of one teacher.

Fourth wave of arrests: On the morning of 20 August, the Israeli forces raided the village again, arresting six more brothers and cousins of the extended family.

Fifth and sixth waves: On 4 September, the Israeli military arrested yet another family member. A day later, the mother of detainee Qasem’s wife Enas, already deeply affected by grief and anxiety, was hospitalized with stroke symptoms, resulting in partial paralysis and loss of memory. A week later, on 11 September, while the mother was still in hospital, Israeli forces took three more members of the extended family away.

On 13 September, the Palestinian family learned through HaMoked that the Israeli authorities had issued demolition orders for the two apartments and single-family home that Israeli forces had surveyed. (Another house has since been added to the list.) Home demolition appeals go through a two-stage process; the courts routinely deny the first appeal, and the final appeal sometimes results in a decision to reduce the number of units to be demolished. This process appears unrelated to any legal findings of guilt or innocence through open court.

On 16 September, the four new arrests included deputy mayor Bassam of Beit Kahil, and his son. The pattern of arrests, demolition orders, denial of family and legal contacts with detainees, and work permit suspensions and cancelations, all without due process in law, fit the classic descriptions of collective punishment —explicitly prohibited by international law (Third Geneva Convention article 87; Additional Protocol I, art. 75.2.d and 75.4.b; Additional Protocol II, art. 4.2.b).

Starting 3 October, the Israeli military court finally announced indictments, revealing that it had charged three more Palestinians— Ahmad Assafrah, Yusef Zahur, and Mahmoud Atuna. Two more Beit Kahil homes have been placed under demolition orders, and families anticipate yet another order in the near future. Appeals are pending for the original orders (see 13 September, above) but the families anticipate that the Israeli military will destroy their homes after a 31 October court hearing.

Home demolitions violate universal human rights and attack the most basic necessity of any family— the need to have shelter and a place to call one’s own. Israeli Occupying Forces have a practice of not only demolishing family dwellings, but also the surrounding infrastructure, such as schools, water cisterns, and community centres.