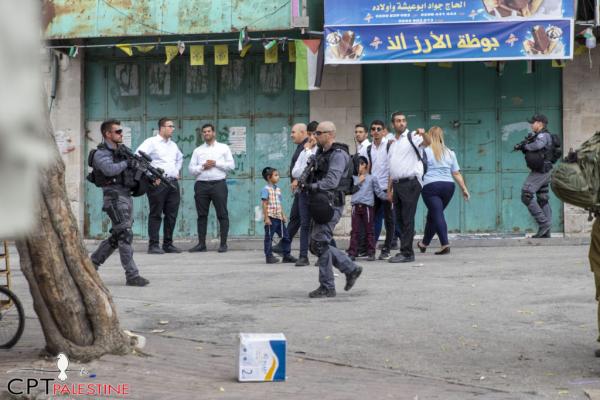 The season of Jewish holidays that began this year with Rosh Hashanah and ended with Simchat Torah (30 September to 22 October 2019) is a troublesome period for Palestinians in al-Khalil (Hebron). The activities of Israeli settlers in al-Khalil, and of the Israeli military that enables them, are disruptive, discriminatory and violent towards the Palestinians who live in the city.

Around 12:00 p.m. on 16 October, a group of Israeli soldiers exited Tel Rumeida Checkpoint 56 into Bab i-Zawiyah and invaded a Palestinian butcher shop next to the military checkpoint, with the apparent intent to use the shop as a staging area. Three Israeli military jeeps and three armored personnel carriers subsequently exited the Israeli military station at Bab al-Baladiyeh and drove up New Shalaleh Street to reach Bab i-Zawiyah. Once there, the Israeli military vehicles proceeded to set up a barrier in the intersection just outside of Tel Rumeida Checkpoint 56. Israeli soldiers instructed Palestinians in the intersection to move out of the way and demanded those who had cars parked there to move their vehicles.

The purpose of this military invasion into the Palestinian market area at Bab i-Zawiyah was to create a military corridor that would allow hundreds of Israeli settlers and visitors to walk from the Israeli settlements of Beit Romano and Beit Hadassah, as well as settlers occupying houses in Tel Rumeida, to the Tomb of Othniel. This popular pilgrimage site for Israeli settlers is located within H1 Hebron and sits approximately 700 meters from Tel Rumeida Checkpoint 56.

According to testimonies from Breaking the Silence, the main goal of the soldiers in the process of creating this corridor for the settlers to pass through is the removal of all Palestinian residents from the designated area. As the military vehicles arrived, Israeli soldiers went to each of the stores located around the intersection and told Palestinian shopkeepers that they were required to close their shops from 12:00 p.m. to 4:00 p.m. Around 2:00 p.m., settlers began exiting in groups from Tel Rumeida Checkpoint 56 and walking up the closed street to the Tomb of Othniel. This movement of settlers in and out of the checkpoint continued for more than two hours, during which time the market area remained closed to Palestinian residents.