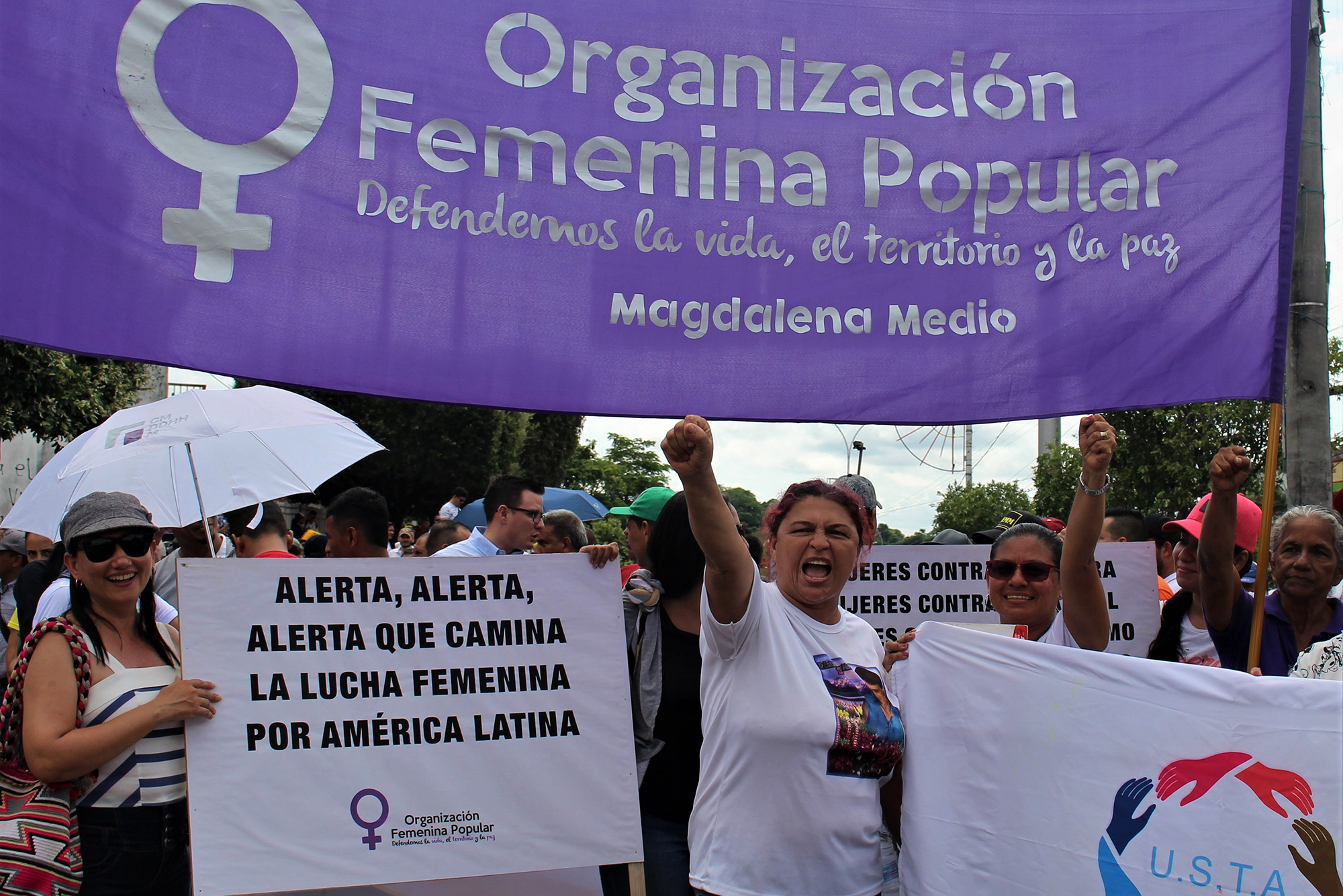 A look from Barrancabermeja – Santander

Recently in Latin America massive mobilizations and important social outbursts will surely lead to major political transformations and determine new directions for countries such as Ecuador, Chile and Bolivia.

Although the current situation in Colombia could be read as a natural continuation of this wave, given the inspiring spirit of the force with which sister nations have risen, the truth is that Colombia, like any other country, has its own particularities, its social agendas, and especially its own historical political debts, which led to a great National Strike on November 21, and has not seen its end, with demonstrations and protests throughout the country for more than seven days.

Many of the reasons that motivate protesters in this National Strike have been the policies proposed during the administrations of Alvaro Uribe Velez. In both of his terms of office, the war resumed against the guerilla groups.  Uribe’s administration also oversaw the strengthening and institutionalization of paramilitary groups, almost four million victims of violence, and three million people displaced, the strengthening of the security sector that included the Armed Forces and increased militarization at a national level. Because of Uribe’s policies, and because of the influence that Uribe has on the administration of the current president Ivan Duque, which means these policies still affect Colombian society, people are rising up to express their disagreement with the status quo.

From Barrancabermeja, headquarters of our office in Colombia, we as Christian Peacemaker Teams have captured through our lenses not only images, but demands and longings of the Colombian people. Here, we will present some reasons that will help contextualize the motivations of Colombians to mobilize massively in the streets throughout the country. 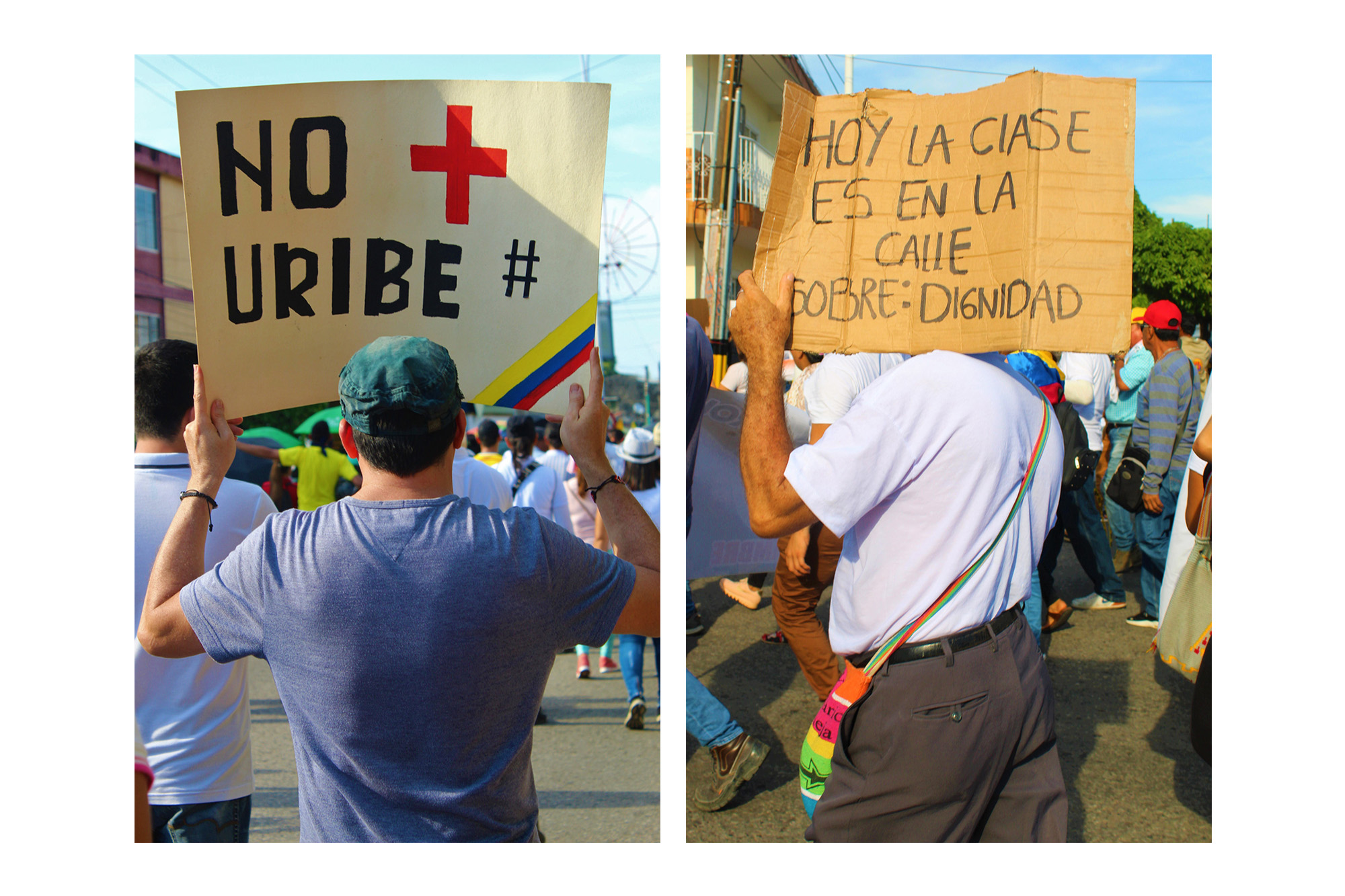 On August 30, in Aguas Claras II, in San Vicente del Caguán, the national government carried out a bombardment against a dissident group of the FARC-EP, killing 18 minors in spite of knowledge of their presence in the zone and the forced nature of their recruitment. This information was deliberately concealed by the government, who celebrated the act of war, and subsequently lied about the number of children involved. Testimony from nearby villagers suggests that three minors fled alive but injured from the scene, and were subsequently killed by the Army after it chased them with dogs and drones.

The government has presented different proposals for changes in labor policy that has generated rejection from different sectors. Some of these are: 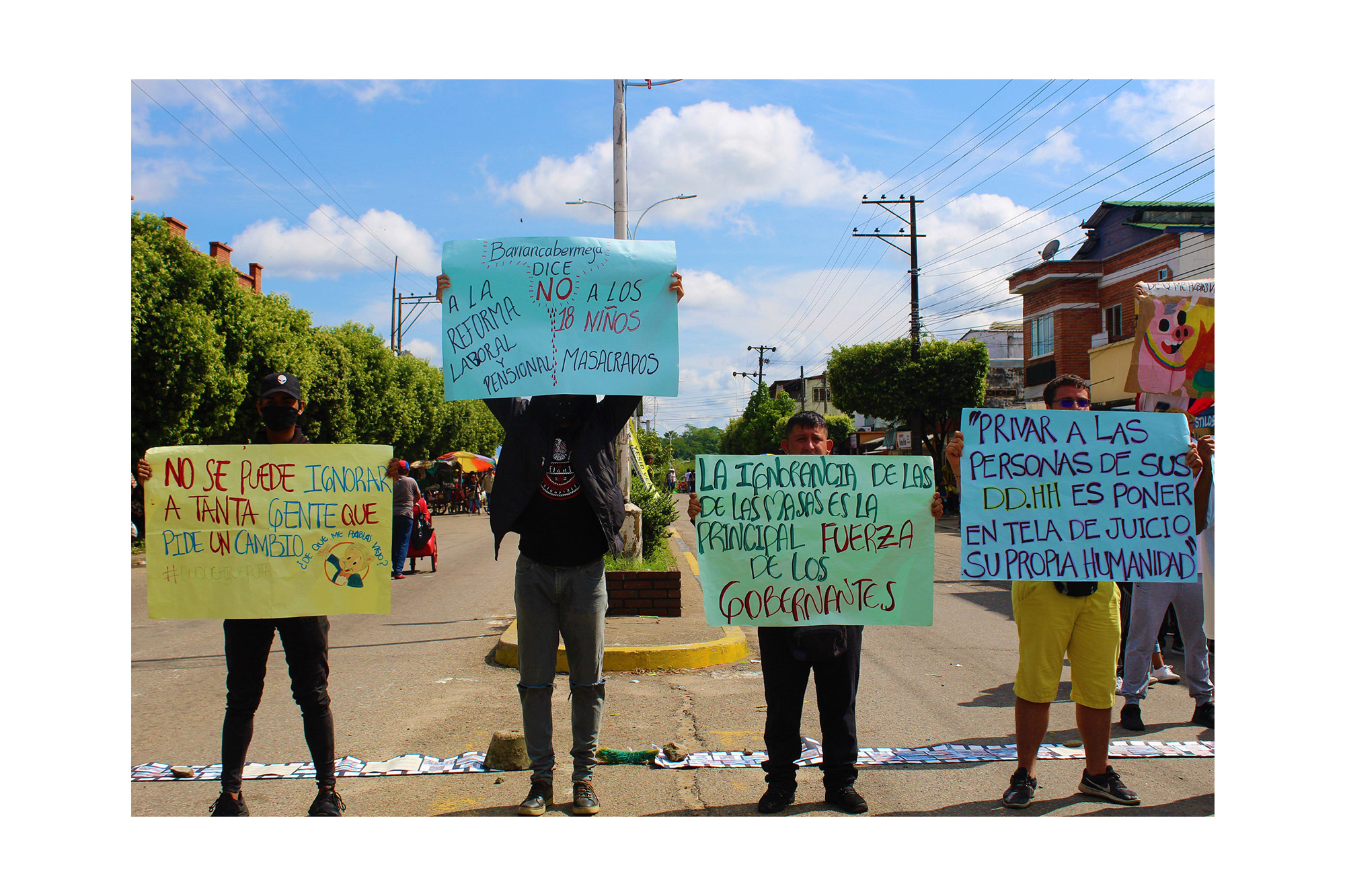 The national government wants to convert the state pension fund (Colpensiones) into a private fund, reduce social security payments to below the monthly minimum wage and increase the retirement age. 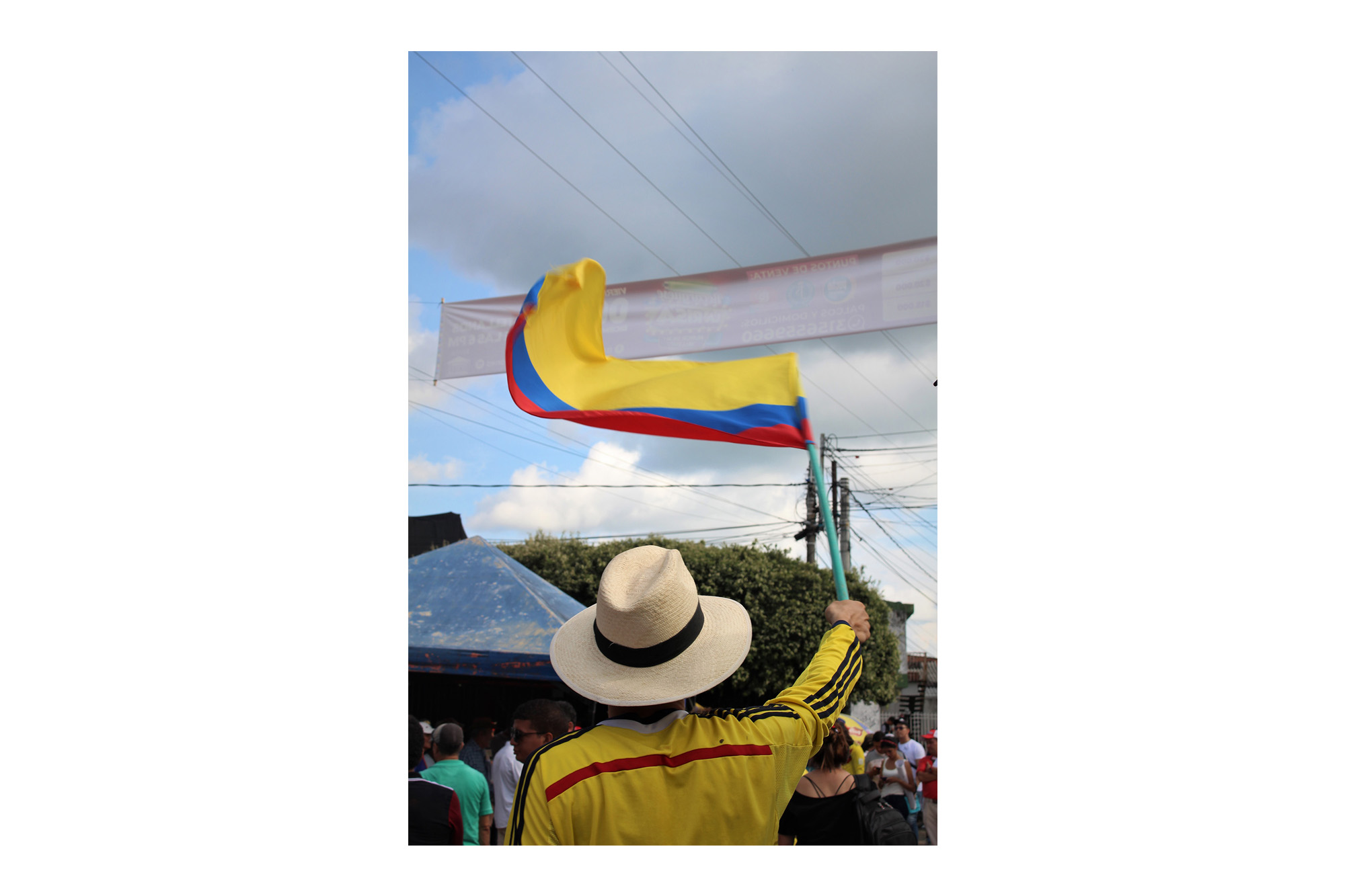 Assassination of Ex-Combatants of the FARC

Failure to Implement the Peace Agreement

Social organizations demand from the government a greater commitment to the implementation of the Peace Agreement signed with the FARC-EP, in 2016. Especially those points that relate to political participation and the gradual and voluntary substitution of illicit crops with other subsistence alternatives. This, according to experts, contributes to the insecurity experienced by the indigenous and small farmer communities. 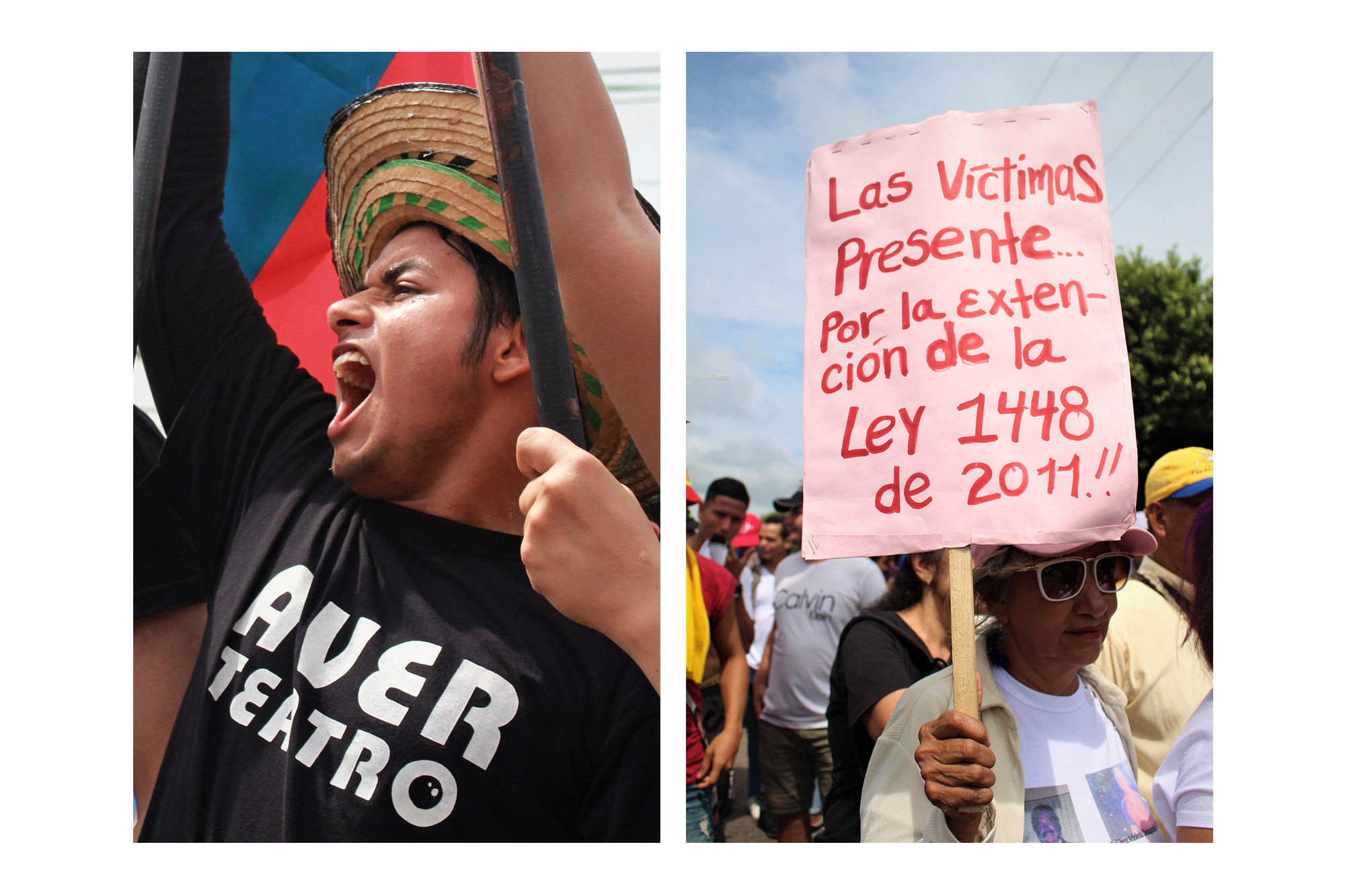 According to the National Indigenous Organization of Colombia (ONIC), in the last 14 months – which has been Iván Duque’s term of office – there have been 120 murders of indigenous people (out of a total of 115 indigenous peoples in Colombia, equivalent to 1,905,000 people or 4.4% of the Colombian population, according to the 2018 Census). That is equivalent, on average, to the murder of one Indigenous person every 72 hours, showing a systematic and continuous persecution against the country’s indigenous leaders. 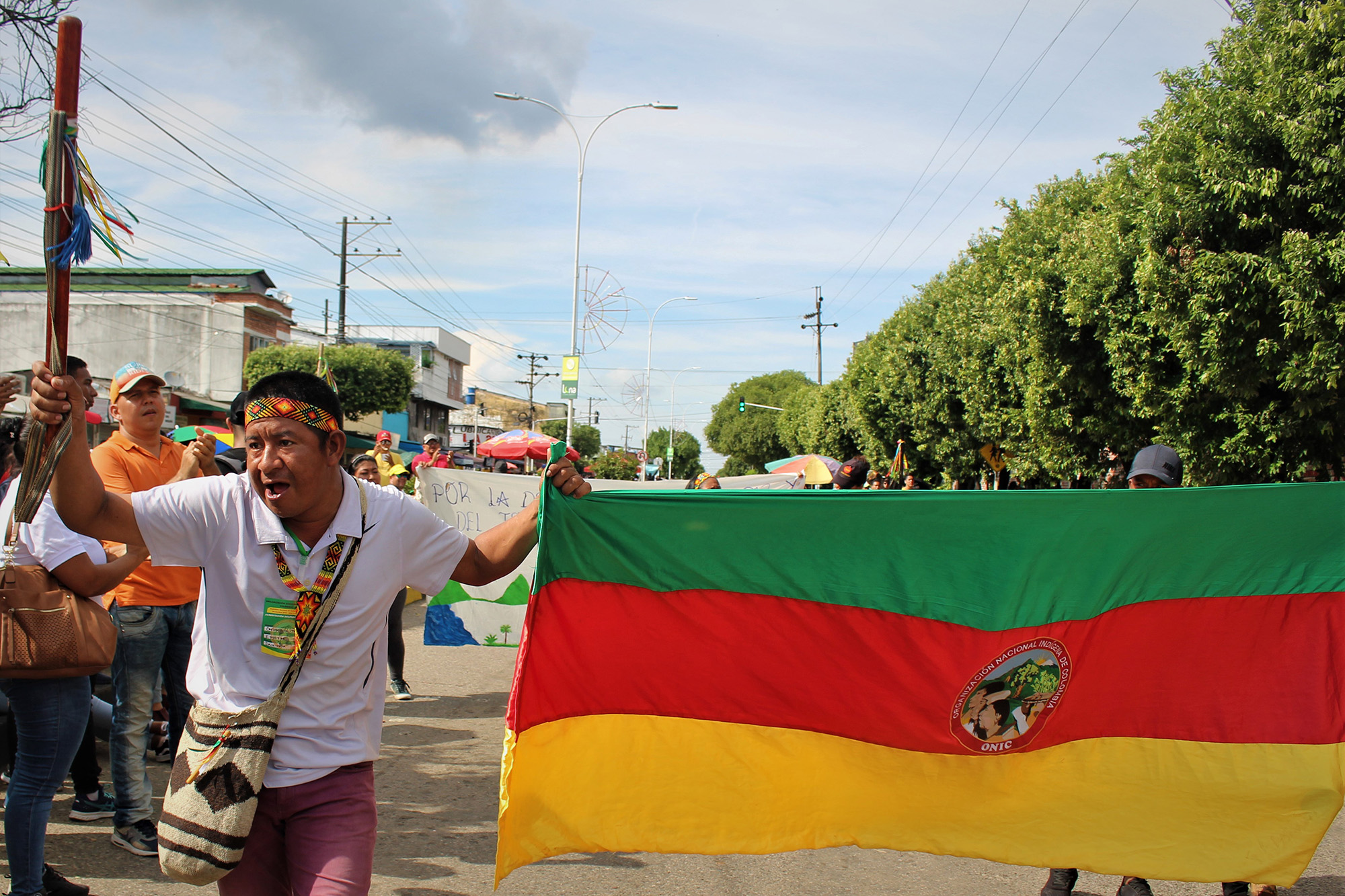 Non-fulfillment of Agreements with Student Leaders

The national government is required to comply with the agreements signed in 2018, after two months of student protests, which includes funding for public universities. Although an investment of 300 billion pesos was negotiated, by 2020 only 78 billion will be designated.

Unfavorable Image of the President and the Criminalization of Social Protest

A Gallup poll corresponding to October 2019 placed Duque’s approval rating at 26%. Furthermore, the government has placed restrictions on social protest, a constitutional right, and has criminalized and stigmatized the protesters.

The quarterly report of the Femicide Colombia Foundation, reports that in 2019 at least 239 women have been victims of femicide, of which 82% were between the ages of 19 – 35 and 64% of these women were attacked in their homes. They left, in 2019, 90 orphaned girls and boys.

Colombia, which ranks second in Latin America for LGBTIQ+ homicides, records a figure of at least 549 LGBTIQ+ people killed, along with 431 acts of police violence, 284 physical attacks, 11 acts of torture, 3 extrajudicial executions and 2 attempted homicides. 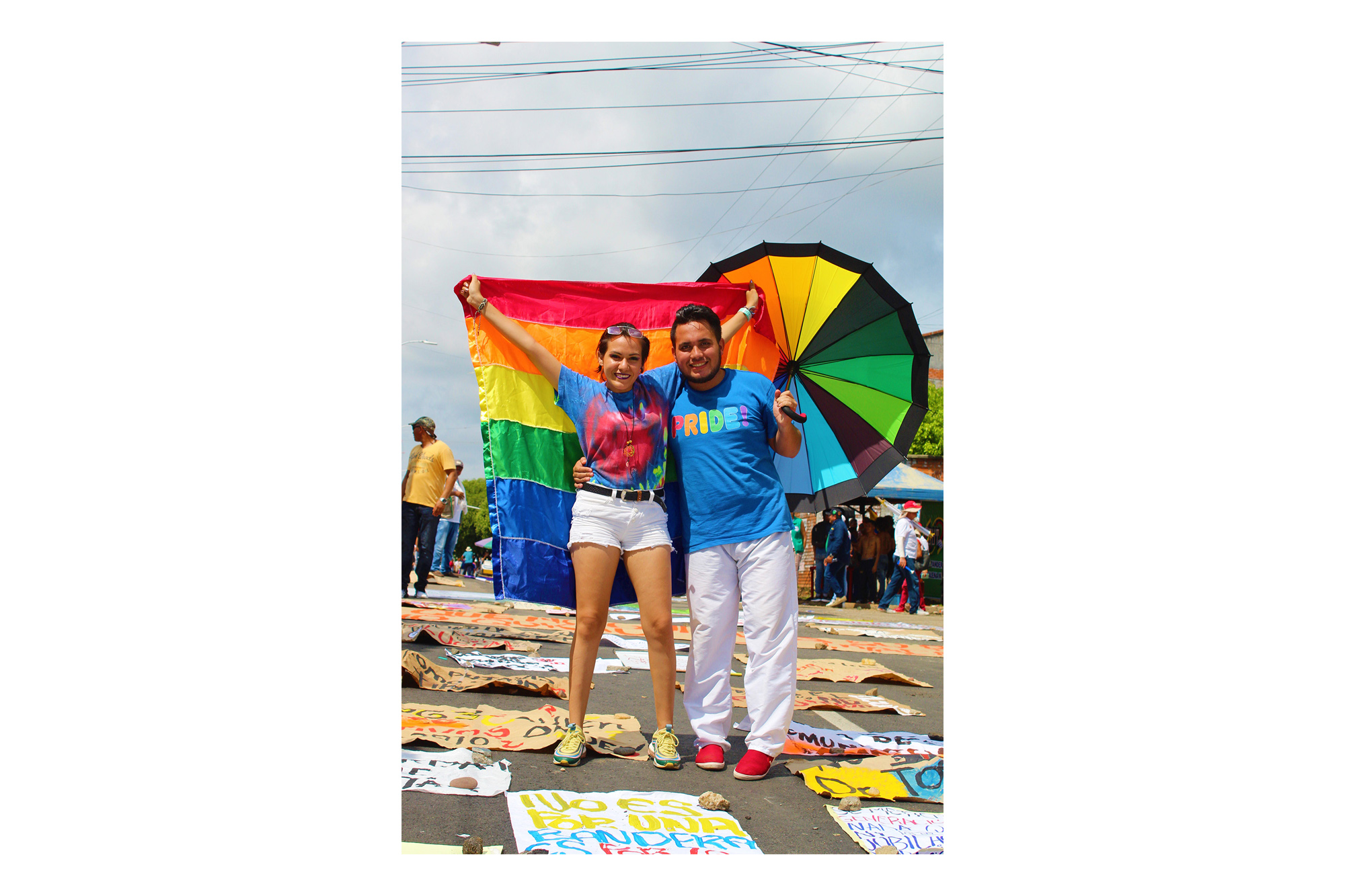 The Plenary Chamber of the State Council (administrative high court) granted permits for different pilot technical feasibility tests to be carried out in the Magdalena Medio valley and Cesar-Ranchería Basin, despite knowing the consequences that this activity can cause for the environment and without prioritizing the search and implementation of other types of more sustainable sources of energy. 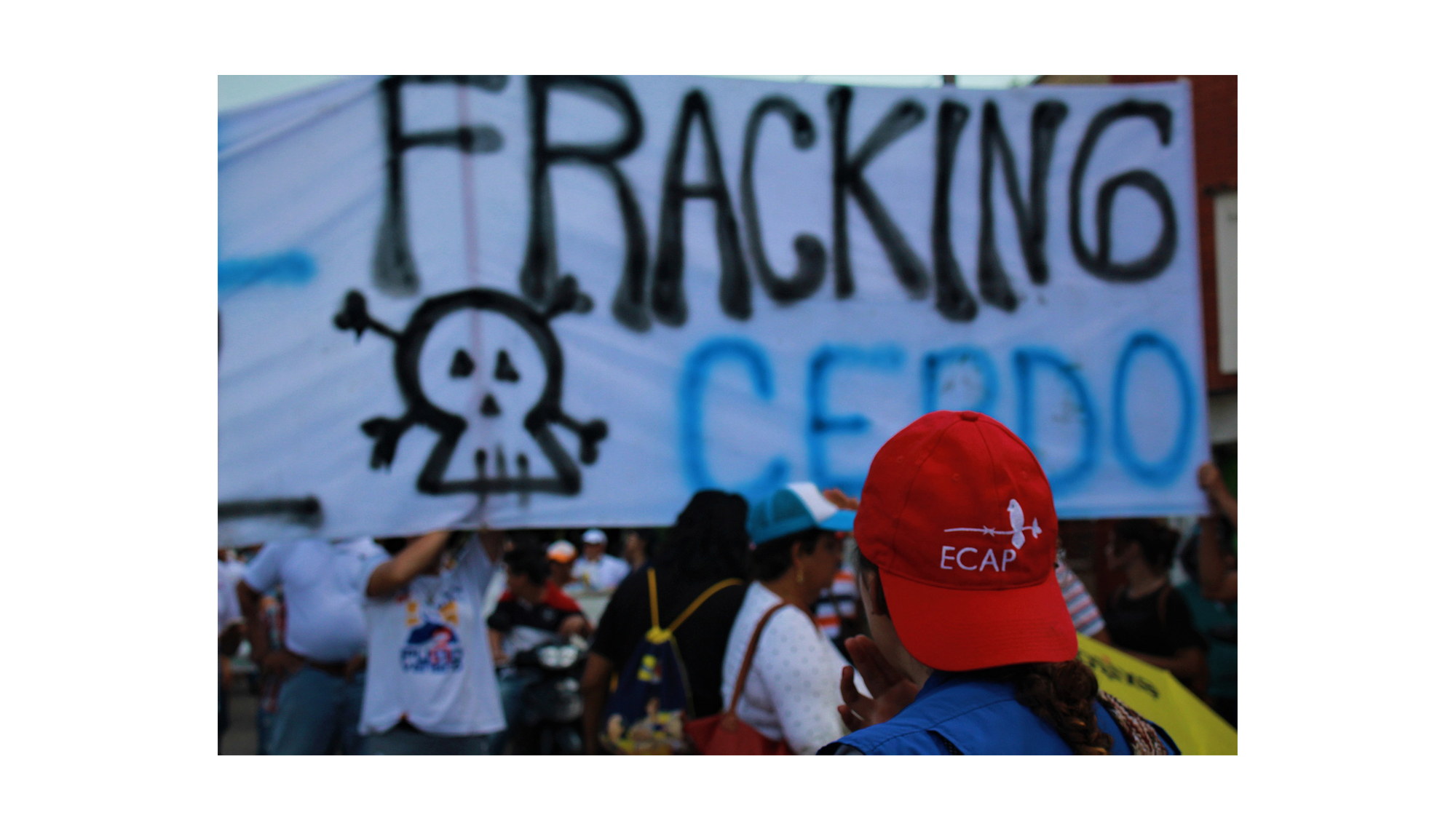 Every year, corruption robs approximately 50 trillion pesos (approximately 15 billion US dollars) from Colombians. Some examples of corruption in the country are: Odebretch and the Ruta del Sol highway contract, Navelena, the Carousel de la Toga, Reficar, Fedegan and the District University, among others. 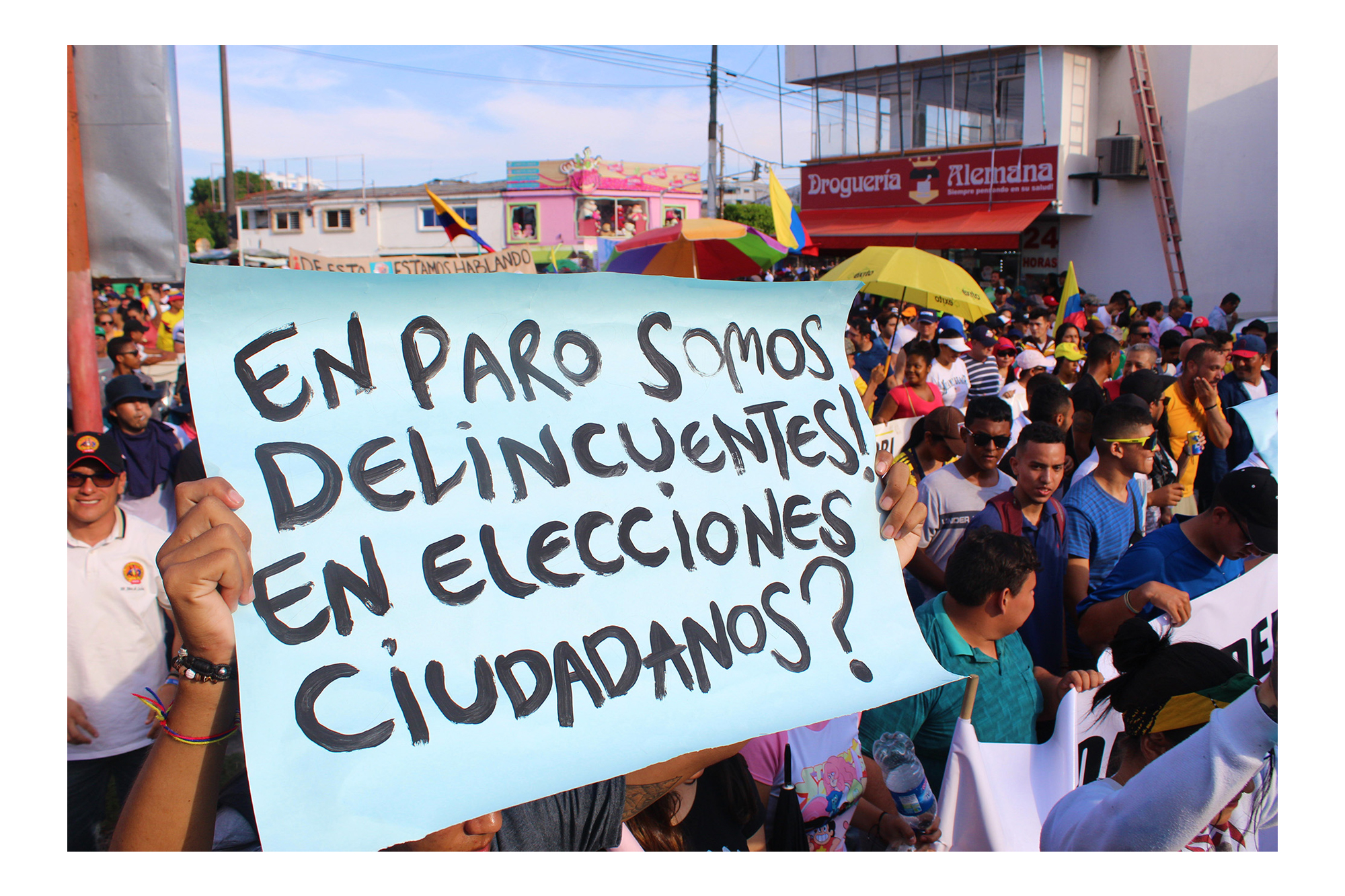 Despite being eliminated by the Constitutional Court for failures in its process, this is one of the changes that the Government has pushed the most.  It intends to reduce taxes to large companies and multinationals while increasing taxes to the middle class.

The government seeks to impose on industries and homes in neighborhoods of social strata 4, 5 and 6 (middle to upper-class neighborhoods) a new surcharge of 4 pesos per kilowatt/hour with which the Government intends to raise 135 billion pesos a year to invest in Electricaribe. Although this represents less than 1%, between 800 and 1,300 pesos per month, the Strike organizers say that the increase could be more like 35%.

The Government seeks to privatize state owned companies such as Ecopetrol, ISA, CENIT, regional electric companies and all companies where the State’s participation is less than 50%. 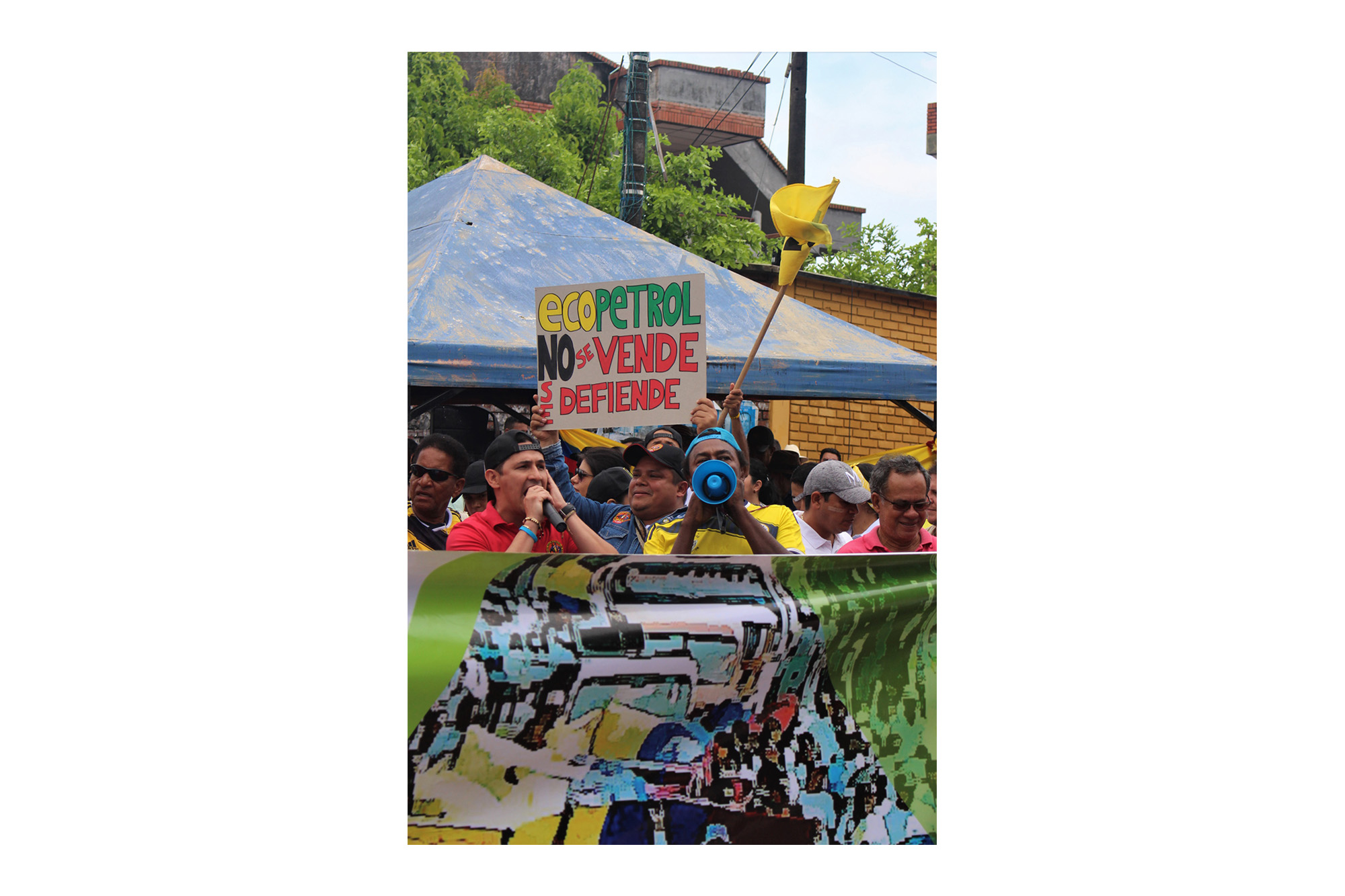 The creation of a State Financial Services Holding, a group of state-owned companies linked to the financial sector, would not be regulated by the State and is considered an “undercover privatization.” The National Strike opposes this proposal, as it would push for higher profits of these public companies, eliminating subsidies or the cancellation of debts to small farmers by the Agrarian Bank or an increase in interest rates for home purchases through the National Savings Fund. 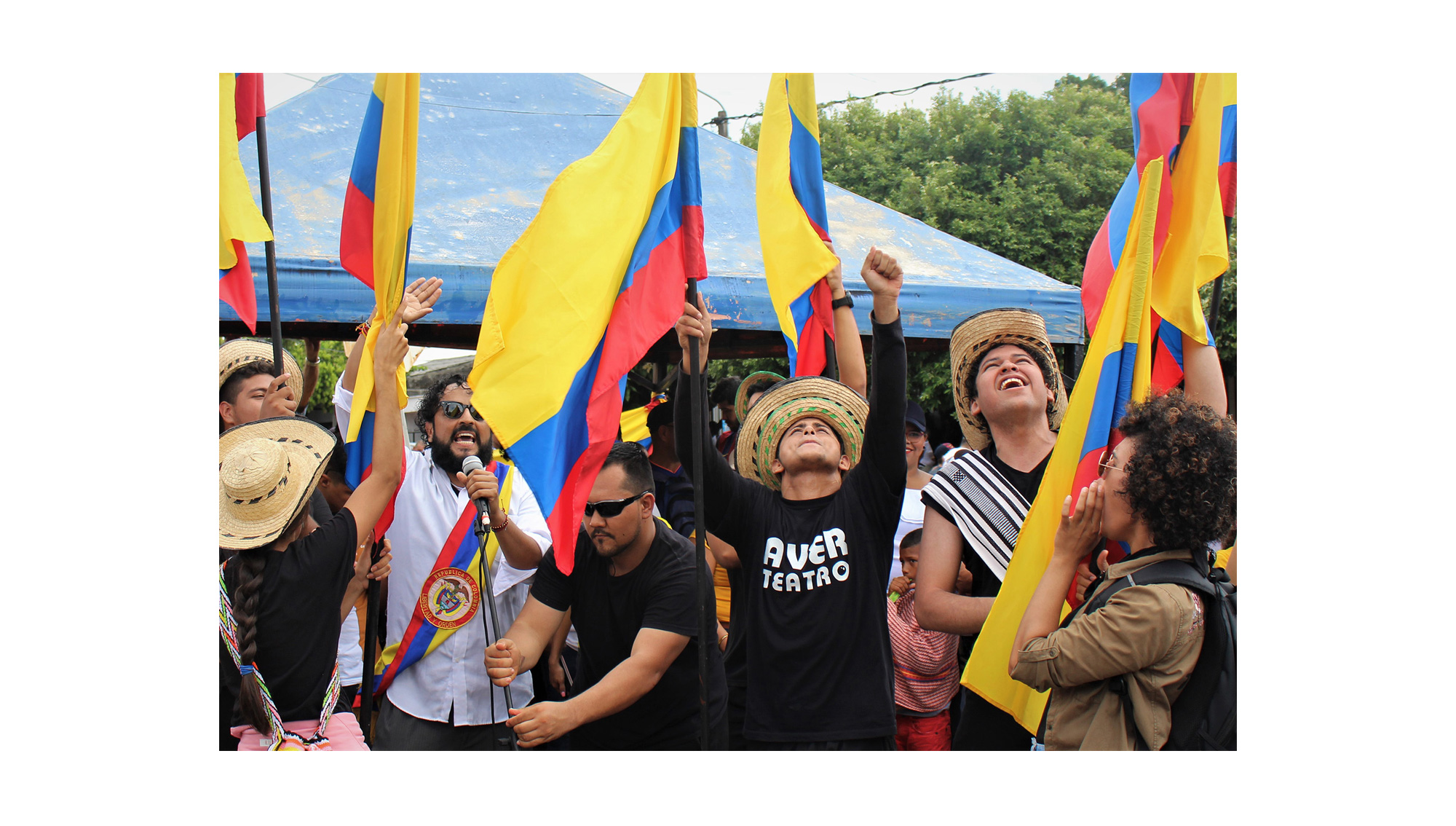 In Honor of Dilan Cruz

The Government has used “legal” means of repression to try to silence people’s voices. Voices such as Dilan Cruz, a 17-year-old man, killed by the ESMAD (riot police) while exercising his right to protest—an exercise that is not only legal and legitimate, but also a mechanism through which people can express freely and publicly their desire for change.

We want to dedicate this report in his honor, and we ask for prayers for him, his family and those who love him, and today mourn his loss. Prayers for the people who raise their voices nonviolently and demand to be heard. Prayers that those in political power will hear the voices of the people. 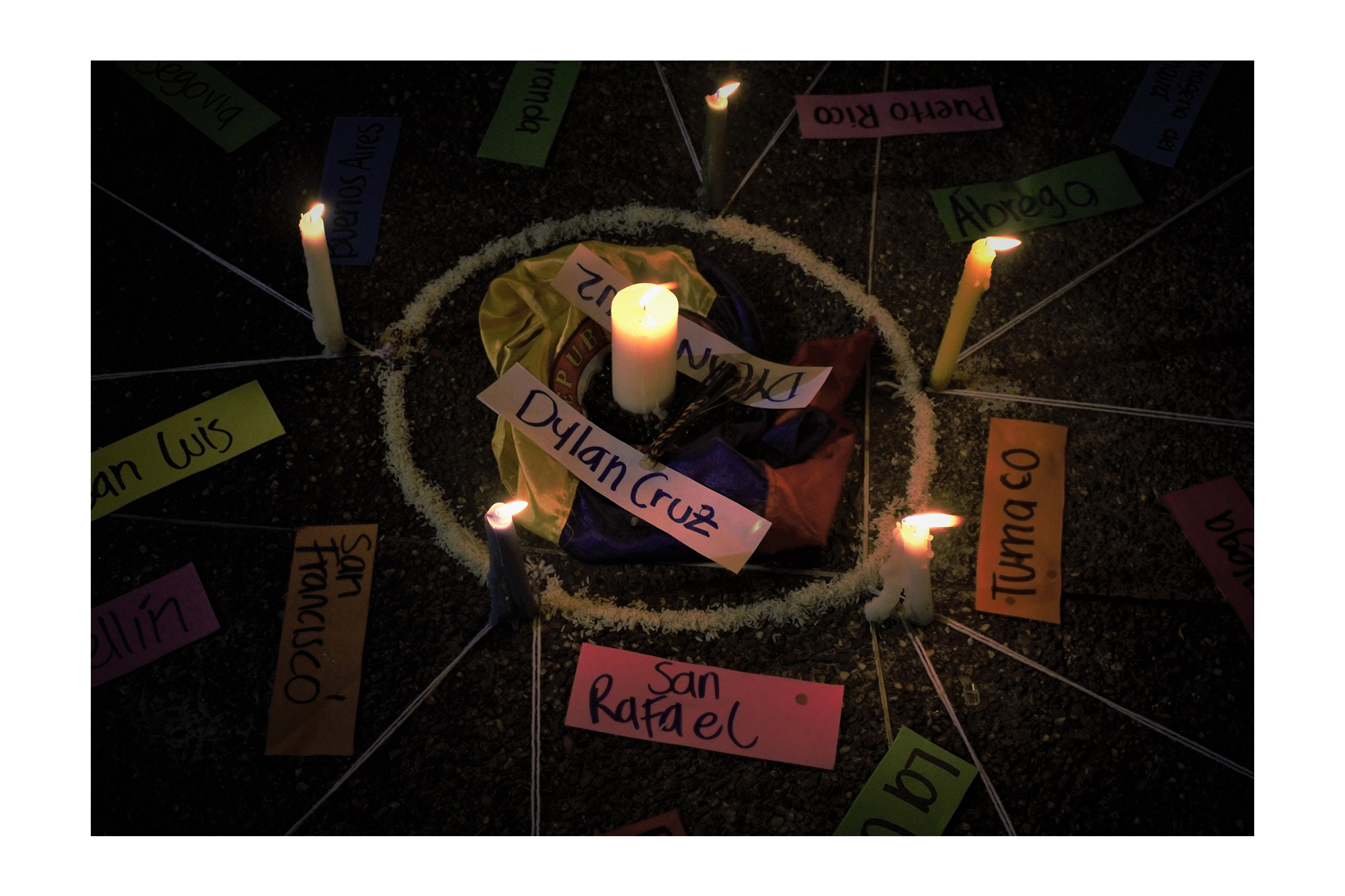