TURTLE ISLAND: It’s still our land, so where is the sharing? 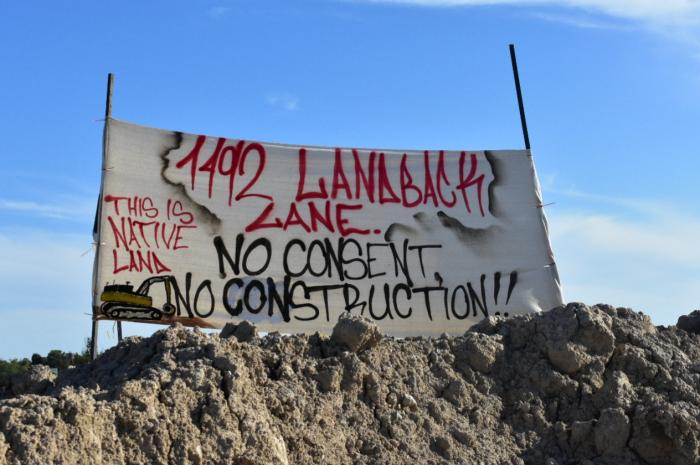 On a sunny afternoon in Winnipeg, Adrian Jacobs and I share a beer as we do an interview on the question of land justice. Adrian is Cayuga of the Six Nations Confederacy and Keeper of the Circle for the Sandy-Saulteaux Spiritual Centre in Beausejour, Manitoba. I’m a second-generation Settler who does decolonization work for Mennonite Church. I also serve on CPT’s Steering Committee.

Adrian and I are good friends, and we talk easily for close to two hours about the need for reparations, why Canadians resist such, and how we can mobilize the church into action. Ever since I’ve known him, Adrian’s always focused on land as the heart and soul of reconciliation. It’s something that his tradition calls him to. It’s also borne of firsthand experience. Adrian spent time on the frontlines at Caledonia, back in 2006, when Indigenous land defenders were trying to stop a developer from taking more of their land.

Little did we know, that a few weeks after our conversation, Six Nations land defenders would be mobilizing once again in an effort to stop another development project—“Mackenzie Meadows”—right on the borders of Caledonia. Mackenzie Meadows is within the Haldimand Tractland that was set aside for the Six Nations in 1784 as compensation for 4 million acres lost in the American Revolution. The Haldimand Tract stretches back 6 miles from either side of the Grand River in southwest Ontario, Canada. Due to the unlawful sale or seizure by the Governments of Ontario and Canada, the Haudenosaunee Confederacy lost the vast majority of the Haldimand Tract.  The Six Nations of the Grand River, the only reserve community that contains all six nations of the Haudenosaunee Confederacy, has tried to get it back. Their Land Claims Research Office has made 29 separate land claims since 1974. But only one has been resolved. To make matters worse, the Federal Government closed the remaining 28 unresolved claims in 1995.

Mackenzie Meadows sits on one of those unresolved claims. According to Haldimand County, the developer and the band council of Six Nations had actually reached an agreement back in 2019. But land defenders assert that the band council doesn’t represent the people; it’s a system of governance imposed by the Federal Government, and so few people (some say only 4 percent) actually participate in that system. Land defenders believe that “Action must be taken to stop the ongoing development of our lands.” And so they (re)occupied the Mackenzie Meadows lands, renamed it “1492 Land Back Lane,” and the provincial authorities did the expected. On August 5, the police came with force, firing rubber bullets, and arresting nine. But the land defenders…they came back. And they are still there.

For generations, Canada has known that it can only reconcile with Indigenous peoples if it addresses the concerns of land justice. In 1996, the Royal Commission on Aboriginal Peoples (RCAP), the most significant inquiry into the fractured Indigenous-Settler relationship, offered 400 recommendations to repair the relationship. And at the center of all those recommendations was a call for a mass transfer of lands back to Indigenous peoples. But 24 years later the land crisis remains. Why?

“I think about an experience from my childhood,” says Adrian.

“At Six Nations, surveyors were doing work for the Canadian Gypsum Company in order to exploit the mineral that was underneath our reserve. As a little kid, I would see the surveyors go out and pound these four-foot-long, one-inch-square stakes into the ground, and then mark those stakes with plastic markers. I heard the resistance of my parents to this exploitation of our territory—and the gypsum mining that was taking place right underneath our family’s property. So us kids, we would go out and find all these steel stakes and we would do our best to wiggle them out of the ground and throw them away. I laugh about it now. But this is the kind of thing that has happened to Indigenous peoples repeatedly over the course of 500 years of colonization.

“We have been forced to limit our officially recognized territories to what the colonial system has dictated. So when, for example, the Caledonia land conflict happened back in 2006, we knew from the 1784 Haldimand Proclamation, from the Plank Road Land claim issue, and from our previous relationships with the government, that ‘disputed’ land was still our land. And Canada knew it as well. Even the local white people knew it! My dad would play hockey with some of these older white men, and they would say, ‘You know that the land that they’re trying to build a development on is your [Six Nations] land,’ even though the official position was that this is Canada’s, and the developer has the proper permits, and so on.

“We’ve got rightful claims on this land. We aren’t looking to get it all back. We’ve even taken efforts to buy back some of our land with our own money and have it recognized as part of our reserve. But we need more—we need a significant and fair share. Yet Canada doesn’t respond. And the reason that Canada does not respond and actually return land and recognize greater reserve lands, is because land forms part of their tax base. So it doesn’t matter what we propose as compromise—and RCAP was a compromise—the colonial system doesn’t like it, and it doesn’t want to recognize it, even though we have a just claim.

“People have made trillions of dollars from this land and we’ve gotten crumbs. From an Indigenous understanding, the fundamental question is, “Where is the sharing of the fruit of the land?” Here in Manitoba, in Treatied territory, you have hydro dams all over the north that are wrecking the local trapping, fishing, and harvesting economies of our communities. Yet Manitoba Hydro, a provincial utility, makes plenty of income, and they turn around and sell the energy made off of Indigenous territories at bargain-basement rates to the United States. Where is the benefit that’s coming to us? It’s still our land. Where is the equity? We are not looking for the tables to be turned and for you to be thrown out of the land. But where is the inclusion in the wealth of this land? We took care of this land and all the other-than-human relatives. When Europeans came here there were lots of fish, lush forests, berry patches, and pristine waters. And now look! If you allowed us into the development and care of the land, then together we could find a way to care—really care—for those seven generations to come.”

Adrian is right. It’s still their land. It’s time Canada shares. Until then, prayers up (and much more) for all those land defenders.

Write to Canadian Prime Minister Justin Trudeau demanding he honor and respect the sovereign rights of the Six Nations people.