COLOMBIA: Where are the assassins? 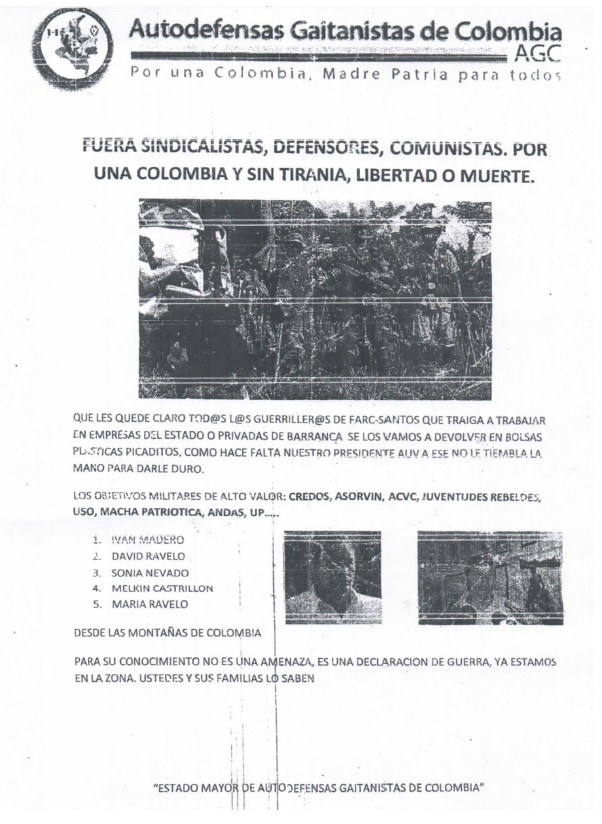 Death threat from The “Autodefensas Gaitanistas de Colombia” (AGC), Colombia’s most powerful paramilitary group against social organizations in Barrancabermeja: “Get out trade unionists, [human rights] defenders, Communists.  For one Colombia without tyranny, liberty or death.”

[Note: The titles are from  this song:  Julio Jaramillo no me toquen ese vals]

I am getting used to not seeing you.

Something ironic and foreboding is happening with human rights, with the lives of those who defend them and with the deaths that are still awaiting recognition in Colombia. Those responsible for this situation blame one another, entangling us and hiding everything as if that were an answer to the questions, “who killed them?” “And why don’t you do something?” We always ask the same thing, and they always answer in the same way. And we continue to wait for the answers that will never come as we stare in horror as these questions continue to rise as fast as the number of murdered social leaders in this country.

We know where the assassins are. Those who kill by omission, making up thousands of meaningless excuses to justify their incapacity and incompetence, while dissociating themselves from their responsibilities to a country suffocated by inequity, that cries out for justice and truth.

I am getting used to being without you.

The story the Government tells us about the assassination of human rights defenders in Colombia is like the history in which a white man comes from Europe in ships full of assassins, whom we later had to thank out of obligation.  And they never give us any explanation for having looted, raped, persecuted, and murdered us. It is that kind of story told to you in organized pieces, but that deep inside you, you know has something missing, you know has something someone is not telling you.

The main thing to understand in this story is that SOMEONE HAD ALREADY TOLD the Government of the situation in the regions, of the multiple violations of Human Rights in the country, and of the risk that human rights defenders are running for demanding justice, rights, reparations and guarantees of non-repetition. For events in which the Government itself has 100% responsibility.

The Government’s manipulation is evident since its spokespeople do not even try to hide it, but instead, appear on television lamenting the deaths of human rights defenders while doing nothing to stop them. They are such liars that they have even gone so far as to say that they knew nothing of their murders. As if Colombia had not already amply demonstrated that defending human rights is basically the equivalent of entering a deep and dark lake with a heavy stone tied to one’s neck.

It is in the Government’s best interest to lie since with their lies, they feed the war industry. An industry that never goes out of style and that if you are powerful enough, rich and intelligent, makes you even richer and more powerful. You just have to sacrifice hundreds of thousands of lives to gain more power and more wealth. The key is to get the poor to fight among themselves under the stupid premise that the other is their enemy. They must continue a war in which we Colombians serve as cannon fodder in the legitimate and constitutional exercise of enriching themselves at the expense of the bodies of the poor.  While some of us are exploited, others, with one hand, voluntarily cover our eyes to not see how our brothers and sisters are assassinated. All the while, we fall blind and deaf at the feet of those who have condemned us to death and give thanks.

Now let’s talk about what it costs Colombia to lose human rights defenders. I am not referring to their economic value, but rather to the democratic value that their lives have and how we all lose when we lose them.

It has always been a Government strategy to silence the voices of human rights defenders and make them invisible. Its methods are diverse, ranging from premeditated murder to or finding ways to discredit these defenders. Then there is the type of threat, what we know colloquially as “throwing him to the wolves,” that involves calling a defender a guerrilla fighter to incite the paramilitary groups to kill him.

Human rights defenders have reluctantly accepted the obligation to ensure that truth comes out and justice happens. They have left their homes, livelihood, and even their families to build a dignified and just society for everyone. A society in which everyone matters.  A society where the Government fulfills its obligation to protect the lives of all Colombians.

When they kill a human rights defender, we lose the possibility of becoming better; we lose the capacity and the potential of transformation as a society; we lose the ability to build a country where everyone’s voice counts.

Don’t play that waltz because they’ll kill you.

“Amado Torres, 49 years old, social leader from the village of La Miranda, in San José de Apartadó(Antioquia). His body was carried in a hammock due to the refusal of the Judicial Police to go to site and investigate. On February 29, heavily armed men wearing clothing reserved exclusively for the use of the Military Forces, entered his home and assassinated him “- El Espectator.

To the questions, “who killed them?” and “why don’t you do something,” should be added, “why does this keep happening?”

I’ll get used to not seeing at you.

According to the newspaper El País, the assassination of social leaders has increased by 53% in the first four months of 2020. That is to say that the quarantine has only increased the numbers of assassinated social leaders. We could demand that the Government again answer publicly for all these assassinations, which are appalling and cannot go unnoticed. But I am sure that we will receive one of three responses: the first, a complicit silence; the second, a hypocritical lament or the already famous one, “we are investigating.”

After several days, months, and years of receiving the same responses to the public condemnations by social leaders, you stop expecting something different from the Government. To me, its rhetoric sounds like nothing more than a strategy not only to silence human rights defenders but to drown out the voices of disagreement—the voices that denounce and the voices that remember.

We can conclude that the Colombian Government deliberately tries to separate itself from the illegal use of legal power, insinuating that human rights defenders have the responsibility to watch over their own lives, which makes them, as individuals, directly responsible for their own deaths. And this conclusion confirms our feeling that the Government is washing its hands in the best style of Pontius Pilate.

It only remains to say that we hold those who govern Colombia responsible for the deaths of the hundreds of human rights defenders, and history will be in charge of finding justice for all those voices silenced by the sound of bullets.

I’ll get used to being without you.

Who killed them? You, because you do nothing? Why does this keep happening? Don’t they care what happened?

There are many questions the country is asking at this time. There are too many doubts about what is happening. But the most important thing is that we will never, ever, ever forget.

They are still here, and we are not going to forget it!