“I quarantine myself, not because of COVID-19 but to not be bombed like my brother.”

Dlovan and his friend’s burnt cars after the Turkish attack in Hassan Pirk village.

A family in Batifa is under threat due to the Turkish intelligence base and ill-treatment by local security forces.

Dlovan Shahin was a father of two children and a shopkeeper from Kashan village in Batifa sub-district that belongs to Zakho district in Duhok province. On 26 July 2020, a Turkish drone strike killed Dlovan. Before this bombing, the local Asaish (Kurdistan Regional Government security forces) had arrested both Dlovan and his brother, at different times and without court orders, subjecting the brothers to mistreatment in prison. After Dlovan’s death, the Asaish threatened his family with forced displacement and cracked down on local resistance to the killing and the Turkish intelligence and military presence in the area.

In addition to the direct civilian casualties of Turkish cross-border bombings of Iraqi Kurdistan, the report also highlights the hostile environment that families endure living in proximity to Turkish military bases.

Batifa: From a tourist resort and a trade center to a war zone.

The Batifa sub-district, which administratively belongs to Zakho district in Duhok province, is located in the northwest of Iraqi Kurdistan, approximately 30 kilometres away from the district’s center. Geographically, the sub-district contains 78 villages, but due to the military operations and bombardments since the 1990s, 27 villages are now empty. The area has recently become one of several battlegrounds between the Kurdistan’s Workers’ Party (PKK) and Turkish forces.

In a phone conversation, the mayor of Batifa Dlsher Abdulstar told CPT, “Our area is beautiful and of interest to tourists. It is also an important area for trade between Iraq and Turkey. However, because of the Turkish bombings, tourists are now not coming to visit and do not consider our area safe.” To date, Turkish bombardments in Batifa and Darkar sub-districts have killed 32 civilians and wounded ten civilians.

Turkey recently initiated military operations inside Iraqi Kurdistan codenamed Claw-Eagle and Claw-Tiger. Turkish military have bombed many of Batifa’s villages daily since the start of these operations in mid-June 2020. In addition to the bombardments, Turkish military ground operations are also putting civilian lives at risk. Since the middle of June, Turkish forces have invaded ten villages in Batifa sub-district. Both the villages of Pirbla and Ablahe are now empty after all residents fled for safety.

To conduct many of these assaults, the Turkish government has built 37 military and intelligence bases inside Iraqi Kurdistan. Most of them are within 35 kilometres from the border, but some are much further inside the region, reaching the cities of Erbil, Duhok, Zakho and Soran. Fourteen of these bases are located in Duhok province. In Zakho district, there are three military bases: Grebye, Shert and Gali Zakho and two Turkish intelligence (MIT) bases, one inside Batifa town and another one in the center of Zakho. Turkey has assaulted multiple Kurdish civilians from these newly constructed bases. On 20 August, small arms fire in Shapan village from a nearby Turkish base seriously wounded 33-year-old Nawzad Rashid. On 21 August, soldiers from one of the Turkish military bases in Batifa sub-district attacked three civilian homes in Banky Bny village and demolished the homes with explosives. 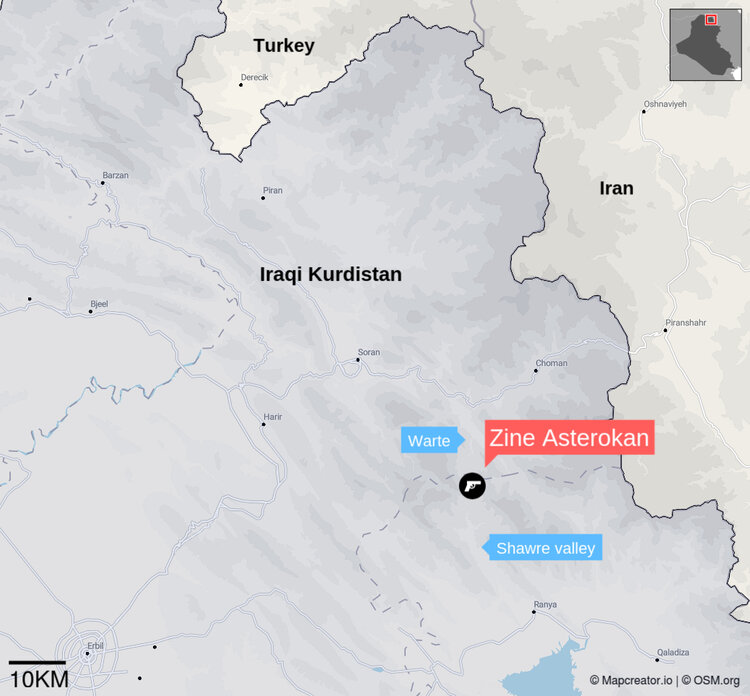 A map detailing the Turkish military bases inside KRG published by the Turkish Presidency’s Communications Directorate.

At the beginning of December 2019, Dlovan Shahin Omer received a phone call from the Asaish of Zakho that he needed to visit their office. After Dlovan arrived at the office, the Asaish officers arrested him without a court order and held him in prison for 25 days. Dlovan’s relatives told CPT that prison officials kicked and beat Dlovan and forced him to sign a coerced confession against himself. Dlovan’s brother told CPT, “My brother was arrested without any order from the court, they accused him of helping and collaborating with the PKK, but they did not have any evidence to prove it. After he was released, they continued to monitor him. Dlovan was not a member of ISIS, nor did he let any foreign army enter the land of Kurdistan region to be treated like that or to be monitored.”

On 24 June 2020, a group of Asaish forcefully entered the house of Dlovan’s brother Fazil Shahin and arrested him. Fazil told CPT, “At the beginning, I was accused of killing someone. Later they changed their story and claimed that they arrested me because I have a connection with the PKK. I am a Peshmerga, and I have no connection with the PKK. They tortured me for 19 days, and they told me to testify against myself that I committed a crime that I did not commit. Every day they were hanging me handcuffed. They were kicking and slapping me.” The Asaish threatened to kill Fazil unless he agreed to lie before a judge and say he had a connection to the PKK.

While Fazil was still in Asaish prison, on the afternoon of 26 July, one of Dlovan’s relatives called Dlovan and told him that his brother Fazil would be released that day. Dlovan’s family wanted to gather for dinner and celebrate this good news together. Peyman Ganjo, Dlovan’s wife, told CPT, “After hearing that Fazil will be released, I asked Dlovan to go to my mother’s house in Sarsang sub-district – 45 kilometres away from Batifa – to pick up my mother so that she can join us for the dinner party. When Dlovan arrived at Hasan Pirk village in Bamarne sub-district, he saw one of his friends on the road, and so they parked their cars on the side of the road to greet each other. At that time, a Turkish drone bombed Dlovan’s car killing Dlovan and his friend Abdulla Omer.” Dlovan was 30 years old when Turkey bombed and killed him.

When reflecting on the loss of Dlovan’s life, Peyman Ganjo said to CPT, “I cannot think of life after the death of Dlovan. Dlovan left a four-year-old daughter and a three-year-old son behind. My son Sipan does not understand what happened, but he cries all the time. My daughter Norra believes that her dad is still alive and that he is at his store and he is not back home yet, she is always asking about her dad.” 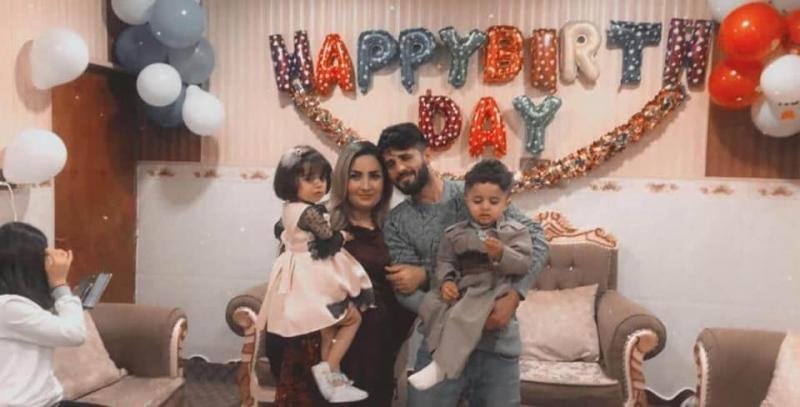 Dlovan, Peyman and their family are celebrating their son’s second birthday.

Despite a promise to release Fazil and the killing of his brother Dlovan, Fazil was not released on 26 July. On the third day of the funeral, Dlovan’s family members and relatives visited Asaish and the local authorities to ask them to release Fazil. With the support of their tribe that put pressure on Asaish, the authorities finally released Fazil on 28 July. A month after his release, Fazil told CPT, “At the moment, I am like an unburied dead body. My body still shows signs of torture from the time in prison. My innocent brother was killed. I lost my job, and I cannot get a job because the Turkish intelligence is watching me all the time. That is why I quarantined myself at home. Not because I am afraid of getting Covid-19, it’s because I have a fear of being bombed by Turkish warplanes. I continue to stay at home so as not to have the same destiny as my brother.”

On 31 July, the first day of Eid al-Adha, family members, relatives and friends of Dlovan wanted to walk towards Dlovan’s grave. The mourning of lost family members by their graves during the Feast of the Sacrifice is an old Kurdish tradition. The Asaish forces stopped the marching group and arrested 13 of the family friends and relatives, including two reporters from local media agencies. Omer Shahin, Dlovan’s brother, told CPT, “After my family was stopped and couldn’t finish the march, security forces in high numbers surrounded our house and told my family that for the sake of protecting the MIT [Turkish intelligence] base located 25 meters away from our house, which was built in 1997, to leave Batifa town as soon as possible and move somewhere else. [Asaish] also covered a window of our house [which overlooks the MIT base] with an iron board.”

Eventually, the extended family engaged in negotiations with the Asaish, who allowed the family to stay in Batifa after coercing them to sign a document that they would not take any action against the MIT base. The family told CPT that the Asaish continue to monitor their members and their movements.

Ongoing Concerns about the Safety of Dlovan’s Family

As an organization that has worked since 2007 for peace and protection of rights and lives of the civilian population of Iraqi Kurdistan that Turkish military and airforce target, CPT Iraqi Kurdistan is concerned about the safety of Dlovan Omer’s family, especially as the Turkish intelligence continues to maintain its base and presence inside the town of Batifa, home to nearly 30,000 people. The Asaish members’ actions appear to prioritize protection and support for Turkish intelligence and military operations instead of protecting Iraqi Kurdistan citizens. Extrajudicial arrests and ill-treatment of prisoners are illegal and in violation of Articles 3, 5, 9, 10, 11 and 13 of the Universal Declaration of Human Rights. Also, Article 322 in the Iraqi Penal Code very clearly states that security forces who torture and arrest people without court orders must be punished.

The cruel treatment towards Dlovan, Fazil, and their extended family in Batifa also raises concerns about what type of systematic violence families may be experiencing in other towns and villages that have been invaded by Turkish military and intelligence agents.

Batifa’s mayor told CPT, “The movements of the Turkish soldiers created serious threats for the lives of farmers and villagers in Batifa. The majority of victims from the PKK-Turkey war are citizens of Iraqi Kurdistan. We ask the Iraqi government to protect the sovereignty of Iraq and take serious action to put pressure on Turkey to stop bombing the region. Meanwhile, we ask Turkey and the PKK to resolve their conflict through dialogue”.

CPT calls on the Kurdistan Regional Government (KRG) to protect citizens’ rights to safety, access to a fair trial, and protection from coercion and ill-treatment in detention in Iraqi Kurdistan. CPT also calls upon the United Nations, NATO, and the international community to pressure the Turkish government to respect the lives of civilians, cease all military operations inside Iraqi Kurdistan that have continued for more than three decades, and ultimately initiate a peaceful resolution between Turkey and armed groups to solve their long-term conflicts.