During their
most recent weekly visit to villages in the South Hebron Hills, CPTers
witnessed a large group of Israeli soldiers in the area and heard an artillery
training activity.  Every week,
Christian Peacemaker Teams, along with other internationals, provides a presence
in an area, home to twelve villages, that the Israeli
military has designated as Firing Zone 918—a closed military zone for training maneuvers.

On Sunday, 15
September, CPTers witnessed soldiers and a military vehicle near the village of
Halaweh and two helicopter flyovers as children studied and played at the
school in Al Fakheit.   They
heard several other helicopters flying nearby during the night.  On the morning of 16 September, CPTers
heard what seemed to be bomb detonation and machine gun fire.  Later in the morning, when they visited
the village of Jinba, residents confirmed that the Israeli military had
conducted infantry training exercises nearby from about 6:00 to 8:00 a.m. that
morning.

During their
visit to Jinba village, CPTers learned that the Israeli authorities had stopped
employees of World Vision as they were driving from Jinba to Al Fakheit and
confiscated their car on 11 September.
According to a United Nations employee, soldiers said they would not
return the car for at least sixty days.

The area has
been relatively quiet since May – with no training activities seen or heard,
though helicopter flyovers continued even during this “quiet” time and settler violence and a military raid occurred in
July.  Here is a video of an Israeli military helicopter harrassing the village of Al Fakheit:

On their way
into the area, CPTers also witnessed the digging of a new cistern.  The Israeli government issued a stop
work order on the cistern saying it is in a “nature reserve” (as well as the
firing zone.) Nevertheless, the work continues.

The area is
currently the subject of a court case in the Israeli Supreme Court. Eight of
the twelve villages, where about 1,000 people live, are under eviction
orders.  Many structures within
those villages also have demolition orders.  When the case came to court on 2 September, the judicial
panel proposed mediation.  The case
will again come before the court on 2 October.   The military
exercises CPTers witnessed were the first since the 2 September court date.

The U.N.’s 2012
Humanitarian Impact of Israeli-declared “Firing Zone” in the West Bank
Factsheet reports that in addition to restriction on grazing livestock (the
livelihood of many inhabitants of the area,

residents of firing zones face a range of other difficulties
including the confiscation of property, settler violence, harassment by
soldiers, access and movement restrictions and/or water scarcity. Combined,
these conditions contribute to a coercive environment that creates pressure on
Palestinian communities to leave these areas… International law also prohibits the
destruction or confiscation of private or public property, unless for reasons
of military necessity, as well as the forced displacement or transfer of
civilians.” 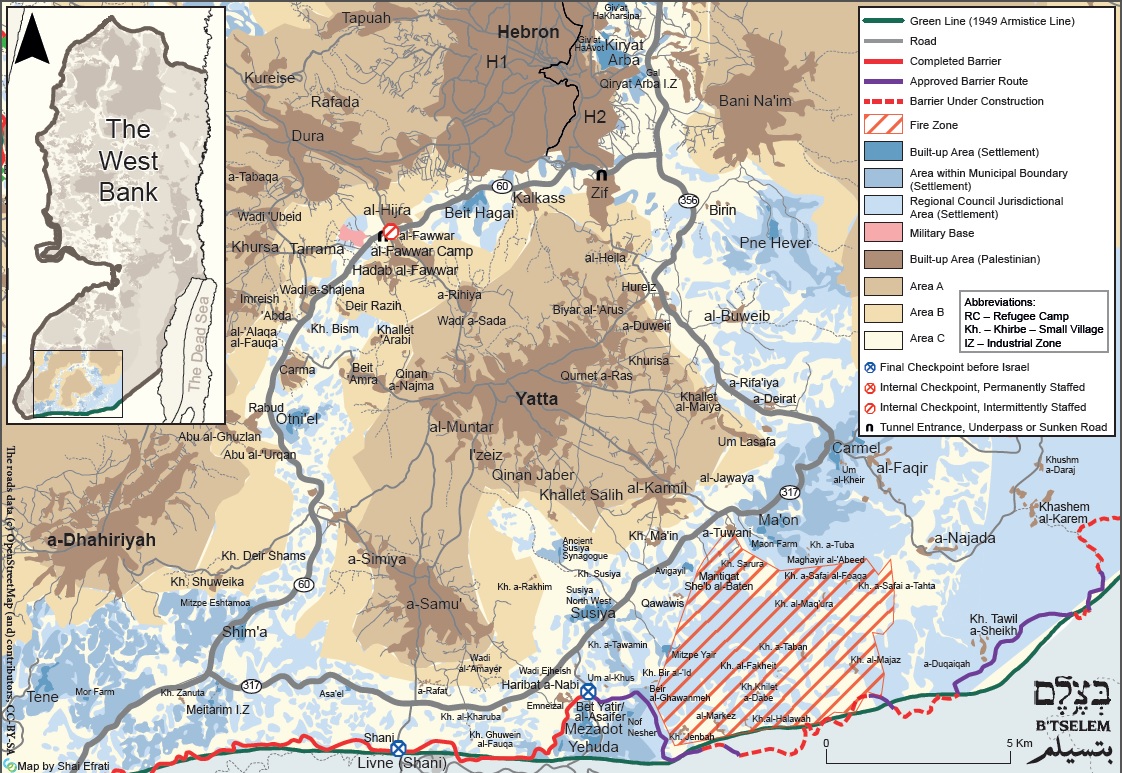