I
first learned about CPT as a young child, when a member of my church joined a
delegation to Palestine. This was the late 90s, and CPT was standing alongside
Palestinians facing home demolitions (the Campaign for Secure Dwellings). I
didn’t fully understand why Israeli military forces were demolishing people’s
homes and taking their land but instinctively I knew that it was wrong.

Fast
forward almost twenty years, and CPT continues to stand alongside people’s
movements to protect community, water, and land. After I graduated from high
school, I went on my own CPT delegation (to Grassy Narrows) and eventually
trained with CPT and served with the teams in Kurdistan and Palestine. 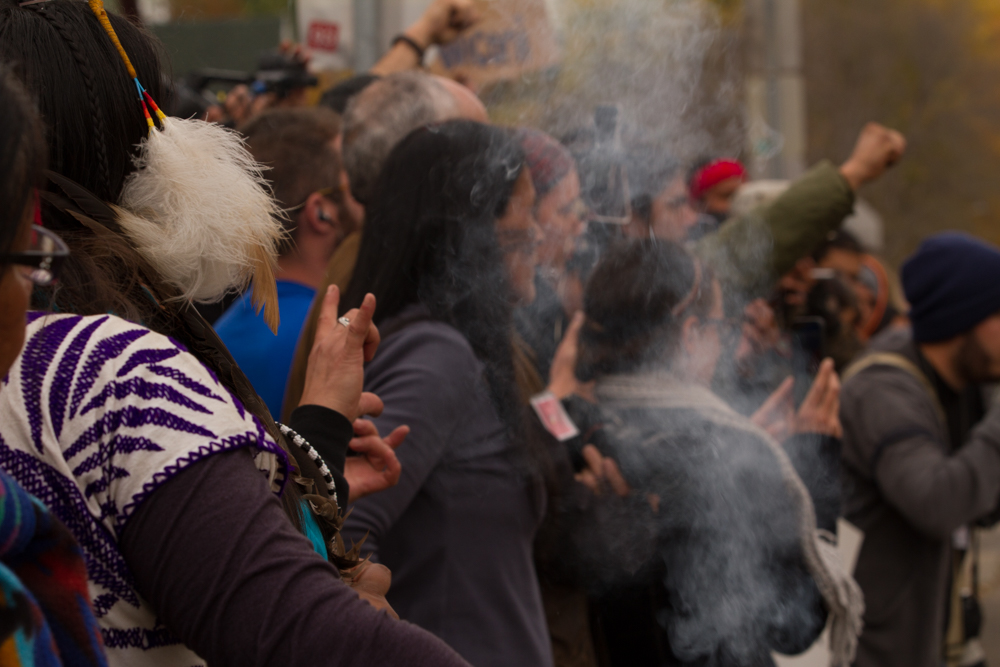 In
these varied contexts, I caught sight of connections and intersections between
experiences of oppression and strategies of resistance. I witnessed Kurdish
communities using nonviolent blockades to slow dangerous fossil fuel extraction;
just like the Anishinaabe community at Grassy Narrows did in their work to stop
clear-cut logging. I saw Palestinians bravely face down teargas and live
ammunition just for demanding the right to move freely on their own land, and
talked with Kurdish villagers refusing to leave ancestral homes despite
repeated rocket attacks from Turkey.

So
last month I found myself in a car headed to Standing Rock, North Dakota, to
stand alongside indigenous communities resisting the construction of the Dakota
Access Pipeline. If you haven’t been following the ongoing resistance at
Standing Rock, I encourage you to check out some of the resources available on
the #StandingRockSyllabus,
which provides both historical context and current commentary. The Dakota
Access Pipeline (or DAPL) was deliberately routed through lands sacred to the
Standing Rock tribe and rerouted away from the majority-white city of
Bismarck.  Its path under the Missouri
River poses a serious threat to the safety of the tribe’s drinking water. Since
April 2016, members of the Standing Rock Sioux Tribe have nonviolently
protected the waters of the Missouri, launching waves of prayerful direct
action.

Prayer
and ceremony truly are at the center of the resistance at Standing Rock. At the
Oceti Sakowin camp where CPT had a presence, every morning began with a
ceremony around the sacred fire led by an indigenous elder. Every meeting and
training began with some prayers or cleansing. Many direct actions involve
prayer, song, and drumming.

The
call from Standing Rock has brought together over 300 indigenous tribes and
nations from across Turtle Island, the largest gathering of tribes in this
country in a generation. Additionally, Standing Rock has brought together the
Seven Council Fires of the Dakota, Lakota, and Nakota nations, which have not
come together since the Battle of the Greasy Grass in 1876 (what white male
historians called The Battle of Little Big Horn). As a white settler, someone
whose ancestors benefited from the displacement and genocide of native peoples
and who lives on stolen land, I know that I will not truly understand the depth
of this prayerful gathering. It is too big for me to comprehend. And it is
truly a humbling experience to be a small part of such a moment in the long
history of decolonial struggle.

Equally
as huge is the response of police and private DAPL security. During the six
days I was in the Oceti Sakowin camp, I sat with people and recorded stories of
police breaking ribs at peaceful sit-ins, repeatedly strip-searching young
women, throwing elders in dog cages, destroying sacred ceremonial items
(including peeing on them), dragging indigenous young people from cars, and
denying medical care or needed medicine after protectors were tear-gassed and
beaten. During my last night
at the camp, the police shot unarmed protectors in the head and legs with
rubber bullets. Then when the temperatures dropped below zero, the police sprayed
water on the crowd gathered around a group of native young people leading song.
A dozen ambulances had to be called in to deal with injuries. One elder
suffered cardiac arrest, but was revived by CPR. In the end, over three hundred
people were injured.

Despite
this brutal violence, the prayerful and dedicated resistance continues, because
this resistance is rooted in something deeper than anger at DAPL. In every
place that CPT works, we build relationships with movements that tap into
legacies of resistance that extend far beyond the given moment.

Each
call for solidarity is also a call for us to reorient ourselves, to see
ourselves as a link in the chain of nonviolent struggle that extends far beyond
us. Even when we do not fully understand the scale or depth of what we witness,
we must continue to bear witness to the call for justice and peace.