PALESTINE: Life in the Seam Zone Village of Al-Seefer 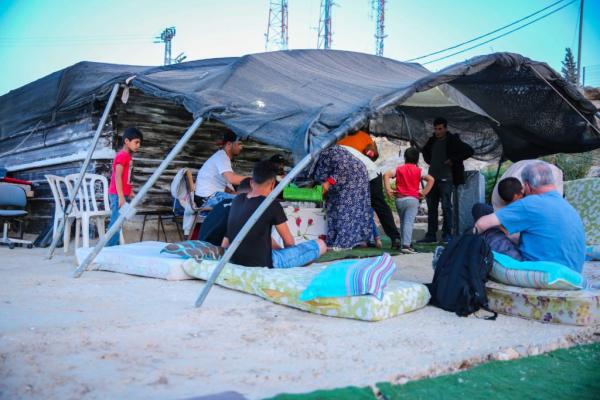 On Saturday 1 June, during Ramadan, two CPTers were accompanying community partners in at-Tuwani in the South Hebron Hills. While they were there, the Bedouin community in Al-Seefer invited the CPTers to share an iftar meal with them and the CPTers accepted with delight.

Al-Seefer village is in the Seam Zone, meaning the village lies within Palestinian West Bank territory between the 1949 Armistice Line (the internationally recognised border between Israel and Palestine) and the Separation Barrier that Israel has built, allegedly for “security” reasons. The village is surrounded by Israeli settlements that are illegal under Article 49 of the Fourth Geneva Convention, and there is an Israeli military checkpoint close by. Palestinians living there, even though they are still in Palestinian territory, are cut off from the rest of the West Bank and require special permits to enter the Seam Zone.

During the iftar meal, the residents of Al-Seefer shared with members of CPT Palestine more about life in the Seam Zone. The villagers, about 60 in total (13 families), may not enter Israel, and their friends and family in the West Bank cannot visit them since they do not have the required permits. Israel has trapped them in what is almost a prison with little access to the most basic of facilities like water and electricity, and their children struggle desperately to access their right to an education. According to UNICEF, what should be just a 15-minute walk to school is usually about an hour as children have to negotiate their way past Israeli soldiers at the checkpoint, pass through a scanner, have every bag searched, and sometimes have to remove their shirts for “security reasons.” In addition, not only do the villagers face the constant threat of home demolitions, but the Israeli authorities also impose strict bans on building permanent structures, and some existing houses are falling derelict as a result.

Compounding the villagers’ problems, Israeli settlers often harass and intimidate them. These harassments have included settlers regularly throwing stones at Palestinians, making holes in their water tanks, and destroying their olive and fig trees with chemicals.

In addition, the Israeli government has a policy of “forcible transfer” for such Bedouin communities as Al-Seefer so that it can significantly expand many existing settlements. In response to international criticism of this policy, Israel is constructing urban relocation centres for the Bedouin, but they are entirely unsuitable for semi-nomadic people who simply want to cultivate their lands and tend their animals. Abu Khamis, the leader of another Bedouin community, has described this forcible transfer into townships “like Guantanamo to the Bedouin.”

One has to ask how the Israeli authorities can use security as an excuse for these human rights abuses.  Moreover, how can they negotiate peace based on dignity, mutual respect, and equality when they treat the Palestinians so appallingly?