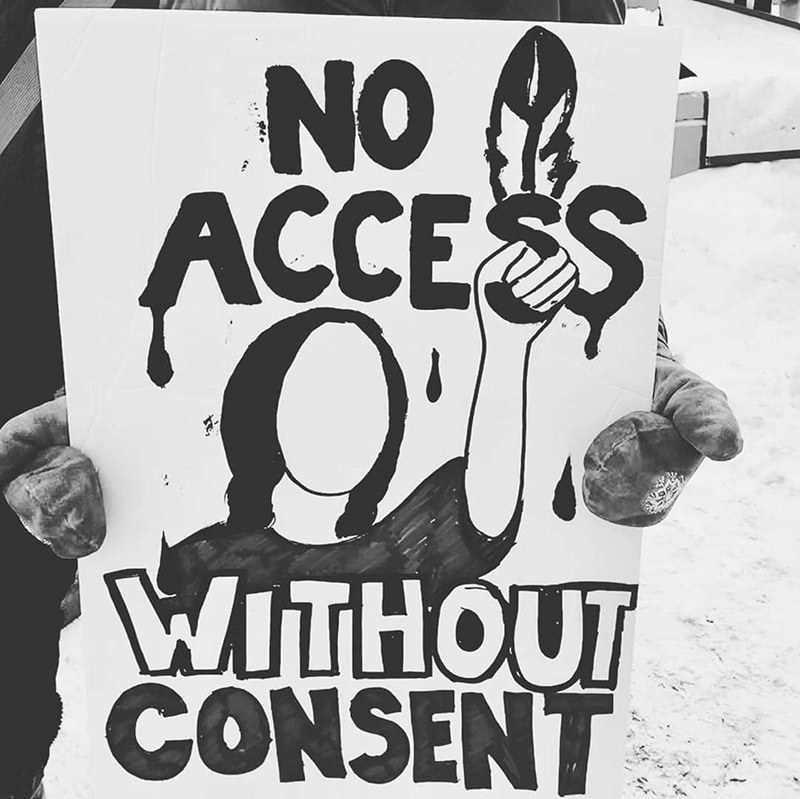 Christian Peacemaker Teams stands with the Wet’suwet’en land defenders and all Indigenous people protecting their rights and the environmental integrity of their homelands. CPT is deeply concerned with the Royal Canadian Mounted Police’s maneuvers this week to establish an “Exclusion Zone” on Wet’suwet’en territory— barring media and clan members from entering— which effectively reinstates  a colonial and an apartheid era pass system.

In the Exclusion Zone, located in the unceded territory of the Wet’suwet’en nation in northern British Columbia, the RCMP are enforcing a court injunction on behalf of a natural gas pipeline development. This injunction violates Wet’suwet’en law, the right to free, prior, and informed consent, and ignores the international condemnation by the UN Committee on the Elimination of Racial Discrimination to immediately suspend work on the Coastal GasLink pipeline until consent is obtained. Also concerning is the RCMP’s demonstrated willingness a year ago to use lethal force to enforce this injunction during a militarized raid on the Gimid’ten checkpoint.

While the Coastal GasLink, RCMP and BC government may point to employment benefits and agreements with Wet’suwet’en band councils, Coastal GasLink does not have the consent of the hereditary clan leaders of their traditional territory.  In accordance with the UN Declaration on the Rights of Indigenous Peoples (principles the BC and Canadian governments have promised to uphold), prior consent needs to be obtained before any work can continue. As such, we echo the demands of all five Wet’suwet’en Clan Chiefs for:

1) Coastal GasLink needs to vacate the territory of the Wet’suwet’en.

2) The Canadian and British Columbia governments must uphold its commitment to implement the Declaration.

3) The RCMP must respect the rights of the hereditary chiefs and refrain from interfering with Wet’suwet’en law.

As a nonviolent accompaniment organization, we have witnessed the threats and use of violent force against Indigenous peoples defending their rights from Burnt Church, to Elsipogtog, to Barriere Lake, to Caledonia, to Grassy Narrows. History is repeating itself in unceded Wet’suwet’en territory, an illustration of Canada’s ongoing settler colonial project that dispossesses Indigenous people from their land for settler industry and capital gains.

The actions of RCMP, Coastal GasLink, and BC government make the rhetoric of reconciliation ring hollow.  CPT is closely monitoring the events in Wet’suwet’en territory, and will continue to advocate to ensure Indigenous rights are upheld here and elsewhere across Turtle Island.