TURTLE ISLAND:  Apache elder asks for prayer to protect land from copper mine. 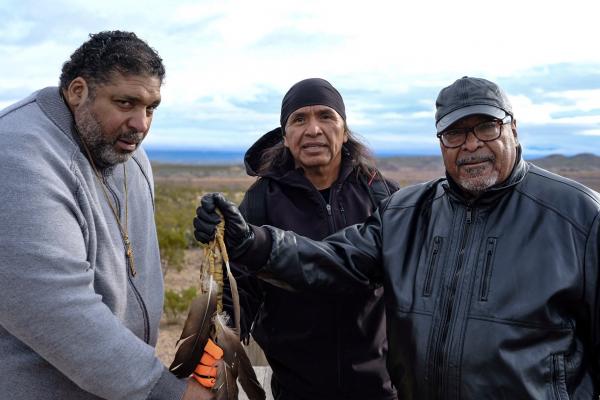 Wendsler Nosie Sr., San Carlos Apache elder, has put his body into his call for prayer. In the last week of November 2019, Nosie ran and walked through snow and rain from the San Carlos reservation to Chich’il Bildagoteel (Oak Flat, Arizona, USA).  Afterwards, he spent a month praying in his ancestral homeland. “This is my religious right, my indigenous right, and my inherent right to return home to protect it from being murdered and to protect our future generations, those yet to be born, so they have a right to their identity and religious beliefs,” said Nosie.   Now, he is on his way to New York City and Washington DC to advocate for his people and for Chich’il Bildagoteel.

Nosie is asking U.S. congressional leaders to reverse their decision to transfer the land from National Forest status to private ownership by Resolution Copper, a Canadian mining company. He asks that we “protect our Holy Places to stop this murder by Resolution Copper” who is so poised to take possession of that sacred land that they have already brought the security company G4S into the area. If government is going to transfer land to anyone, let them be ready to transfer the legal ownership to the San Carlos Apache Nation.

Wendlser Nosie has strongly and publically asked for spiritual backing and prayer.  There are many allied activists who are mystified by a call to prayer as a call to action.  But, as a movement with a mission, vision and values that honors the presence of faith and spirituality, Christian Peacemaker Teams and their supporters how to pray. Let us pray for return of the land to the Apache rather than a transfer to a corporation for extraction. “On earth as in heaven!”

Carol Rose is a CPT reservist and a member of CPT’s Turtle Island Solidarity Network (TISN).  She has been active in solidarity with Chich’il Bildagoteel (Oak Flat)since she moved to the region in 2015.  Her church, Shalom Mennonite Fellowship, adopted the statement,“Shalom Mennonite Fellowship stands with the San Carlos Apache and Tohono O’odham nations in opposition to proposed mines at Oak Flat and in the Santa Rita Mountains,” in 2018.