TURTLE ISLAND: The Wet’suwet’en Nation needs you, NOW. Call BC Premier John Horgan; Tell him to ask the RCMP to stand down 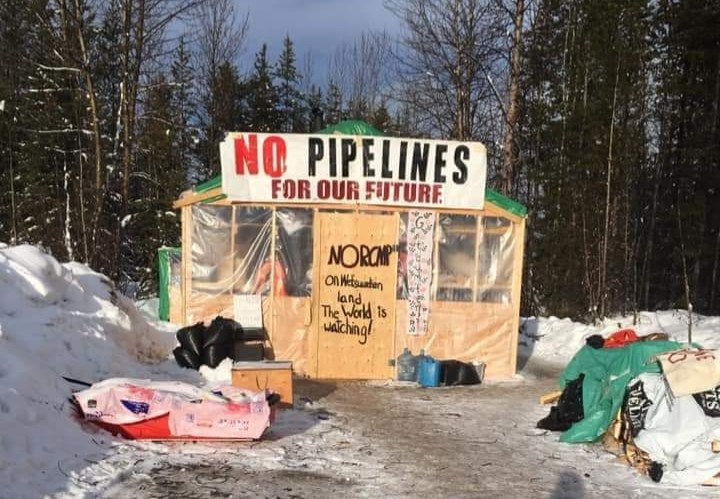 The camp at the 27 kilometre marker on the Morice West Forest Rd leading to the Wet’suwet’en camp.

The Wet’suwet’en Nation needs you, NOW.

This morning, in a pre-dawn raid, the RCMP entered Wet’suwet’en territory, taking down tents at kilometer 39, a supply camp. Officers smashed the window of a radio vehicle and denied a journalist entry into the camp despite that journalist having all the necessary permits. By 7:48 a.m., RCMP officers had arrested all members of the camp at kilometer 38.

On February 4, Coastal GasLink refused to recognize the Wiggus Respect table discussions between the Government of British Colombia and the Wet’suwet’en Hereditary Chiefs designed to seek a peaceful resolution between the parties and prevent a repeat of last year’s Royal Canadian Mounted Police (RCMP) militarized raid on behalf of the pipeline company.

The Unist’ot’en Camp reported that at least 36 vehicles, 1 ambulance, 2 bulldozers and an excavator entered the territory, making way for work to continue the construction of the Coastal GasLink pipeline “despite over 50 instances of environmental non-compliance.” The construction of the 670 km pipeline is a violation of the rights of the five clans that live on the Wet’suwet’en territory, who have unanimously opposed all pipeline proposals and have not provided free, prior, and informed consent, guaranteed under the United Nations Declaration on the Rights of Indigenous Peoples to Coastal Gaslink/ TransCanada to do work on Wet’suwet’en lands.

The protests and blockades set up along the forest service road are a nonviolent and peaceful assertion Wet’suwet’en Nation rights. “They’re invading our people again, starting in the wee hours of the morning, arresting people who have been providing food and medical supplies to our camps, who are camped out along the side of the road doing amazing and righteous work. And right now, they’re being arrested and they’re being removed,” said Molly Wickham, spokesperson for Wet’suwet’en Nation members. “It’s time to stand up for all Indigenous people all across Turtle Island. It’s time to make it known that Indigenous people will not be oppressed any longer—that the RCMP can’t come in and remove us from our territories, that they have no legitimacy on stolen Indigenous land.”