TURTLE ISLAND SOLIDARITY NETWORK: From the Frontlines of the Wet’suwet’en Struggle 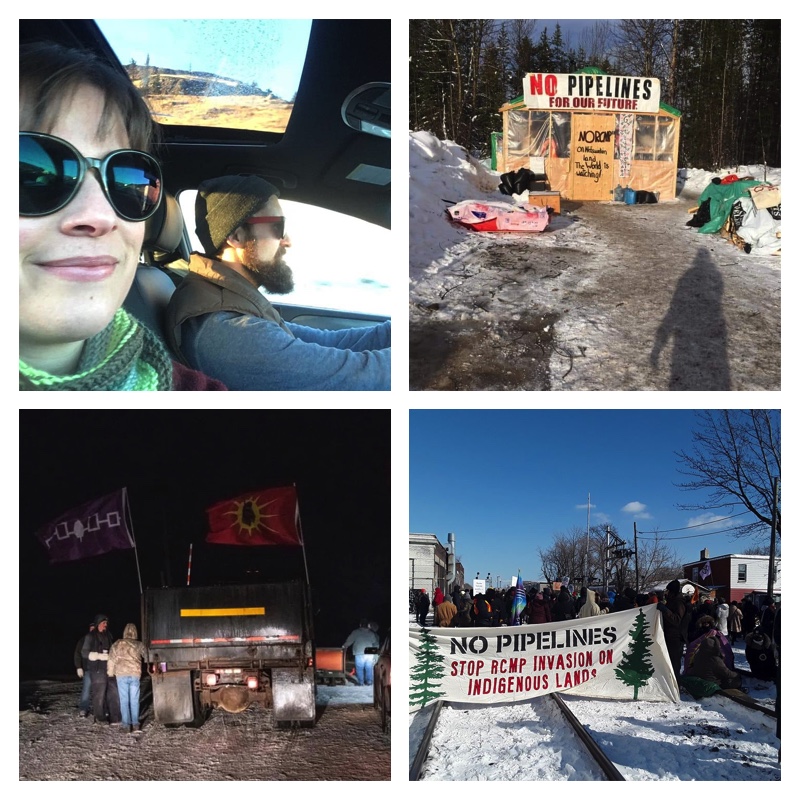 It was dark when we arrived at the Gidimt’en camp outside Houston, B.C., with a trunk full of groceries and winter camping gear for everyone to share. Chuck Wright and I made the twelve-hour road trip on behalf of CPT to the site at the 27-kilometre mark along Morice West Forest Service Road in response to an invitation from Wet’suwet’en leaders for legal observers. It was evening in early February, and the camp was lit with the glow of a bonfire. The sound of people chopping firewood filled the air.

“This is bush life,” said one person while we were being oriented to the camp.

“Where do you get your drinking water from?” I asked thirstily.

“The river gives good water,” said one supporter. I hesitantly dipped my bottle into the Wedzin Kwa (Deep River) — a point of contention between land defenders and Coastal GasLink (CGL), the company behind the disputed natural-gas pipeline. The water was pristine and refreshing, a far cry from what First Nations under boil-water advisories experience every day.

Walking into the woods that first night to reach the outhouse, I stopped in my tracks. I had the distinct feeling I was being watched. I knew the RCMP checkpoint was only one kilometre away. But this visceral feeling of being watched was different and very close. I stopped on the snowy path, my gaze directed toward the trees, and I introduced myself. I declared my intentions for being in the territory: to monitor and document police behaviour, and to do no harm.There is a presence here. This land is sacred. During our week-long stay, moments of prayer and ceremony highlighted our time at Gidimt’en camp.

Join Natalie for a live webinar on May, 5, 2020: Stories from the frontlines of the Wet’suwet’en Resistance

On the first day at the camp, I noticed red dresses hung up along the road.  The red dresses are reminders of the women and girls who have been killed or gone missing on the nearby “Highway of Tears” and express distress over the risk the CGL worker camp poses to women in this community. The 2019 report of the national inquiry into Missing and Murdered Indigenous Women and Girls states that there is substantial evidence that links resource extraction projects with violence against Indigenous women and girls especially where worker camps or “man camps” are established.

Being on this beautiful land and meeting the people on the frontlines has transformed my engagement from one of intellectual knowledge to a deeper spiritual and physical understanding. It’s one thing to read about the region: I was inspired by the landmark Delgamuukw court case, which found that Aboriginal land rights in the area had never been extinguished by Canadian occupation and hereditary chiefs continue to have title over their traditional territory (I first read this in 1998 as a university student). But it’s another to hear first-hand stories from people about what this territory means to them. In conversation with hereditary Chief Namoks during our stay, I learned that the camps set up and occupied along the Morice Forest Service road are historic village sites. He added that the proper archaeological assessments have not been done in the areas where CGL is scheduled to work. That same week he had been in talks with CGL and provincial government representatives and reflected, “We always suspected who was calling the shots, but these meetings were the first time I actually saw industry directing government officials what to do.”

I met a nine week old baby with big, bright eyes who smiled when I said, “What do you think of all this? All this is for you and the children to come.” I later witnessed an elder confront the RCMP officers at the checkpoint that restricted people’s access to the territory state: “We’re not doing this for us. We’re defending the land for the children to come. Not just First Nations children, all children.”

During our time at the camp, we witnessed the overwhelming presence of heavily armed police, tactical units, helicopters and drones to defend an injunction passed to protect Coastal GasLink’s pipeline project. We witnessed RCMP restrict and detain media reporting on the situation in the territory.  Chuck and I were arrested on February 8 along with several others when the RCMP expanded their “exclusion zone” in the area, and were held in police custody for over two days.

Canada has not heeded the call from the UN Committee on the Elimination of Racial Discrimination to suspend CGL’s work. The province of BC passed legislation to implement the UN Declaration on the Rights of Indigenous Peoples (UNDRIP) in November 2019 but the province’s Premier, John Horgan, insists the pipeline will go ahead and that the application of UNDRIP will only be forward looking.

It doesn’t matter how many apologies have been issued for residential schools, potlatch bans and other acts of oppression and genocide against Indigenous peoples when the reality on the ground says otherwise. This is why many are declaring, “Reconciliation is dead. Revolution is alive!”

This movement to respect Indigenous rights, crystallized at this time by the Wet’suwet’en struggle, is an important opportunity for church and society to show up and demonstrate what justice could look like. Many churches have been committed to the Truth and Reconciliation Commission’s calls to action and hosting the Kairos Blanket Exercises to learn about Canada’s colonial history and their complicity in it. As we witness solidarity actions across Turtle Island (North America) in response to this struggle for Indigenous rights, faith communities have a real opportunity to step up and bravely engage in these issues, as places where people have a foundation of shared values and established relationships.