Why we should advocate for defunding police 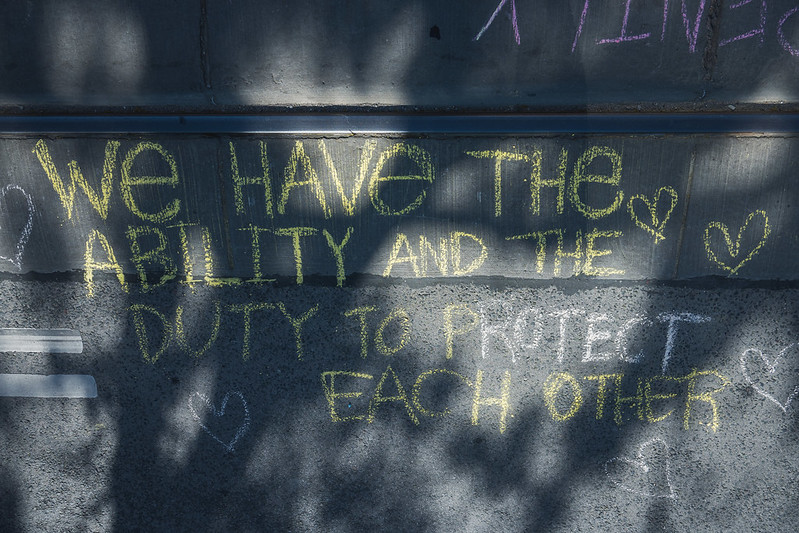 Over the past few weeks, the U.S. and other countries, including Canada, have seen mass protests led by Black activists against police brutality. It has been a long time coming. In the U.S., protests began in response to the police murder of George Floyd. Canadians have our own stories closer to home. On May 27, 29-year-old Regis Korchinski-Paquet, a woman of Black and Indigenous ancestry, died after falling from a 24th storey balcony in west Toronto. Her family believes that police officers in her apartment pushed her off. Her mother had called police for help getting Regis to hospital for emergency mental health care.

I have spent a lot of time lately reflecting on how disturbing it is to live in a society where police are the resource most immediately available to intervene in a mental health crisis. And as CPT’s recent statement in solidarity with the Movement for Black Lives calls us to do, I have begun advocating for the City of Toronto to defund police.

Why? The most obvious reason is that policing is a racist institution. Statistics show beyond a doubt that police are far more likely to stop, arrest and kill Black and Indigenous people than they are white people. Their actions are not simply a matter of individual or collective prejudice among police officers that their superiors could take measures to correct. From its beginning, policing has been a tool for enforcing white supremacy. In the U.S., the first police departments were slave patrols. In Canada, the famous Royal Canadian Mounted Police (RCMP) was founded to remove Indigenous people from their lands to make way for railroads and settlers. Today, police still treat Black people as suspected criminals simply for moving freely in public spaces. The RCMP continues to remove Indigenous people forcibly from their lands to make way for pipelines and condominiums. In fact, police brutality and the criminalization of Black and Indigenous people have worsened over the past 40 years as neoconservative policies have cut funding for social programs, enabled increasing corporate exploitation of people and land, and increased police funding as a means to suppress rising social discontent. Law and order rhetoric has justified the militarization of police and the expansion of surveillance, to the point that police behave much like an occupying force in poor and racialized communities.

Yet even knowing these things, many, particularly white North Americans, have difficulty imagining a future without police. This lack of vision is the second reason I believe that defunding the police is important: the massive resources spent on policing diminish our collective capacity to build safe and healthy communities.  We currently use policing to manage the crises that result when society denies people their basic needs. The most effective public safety strategy we can pursue is to reduce inequity. How much more peaceful would our communities be if everyone had access to affordable housing, good food, public healthcare, and meaningful work? How would our relationships with our neighbours change if we treated addiction and mental health as public health issues instead of public order issues? Equity, of course, means much more than providing for people’s basic needs; it also means relinquishing public safety strategies that prioritize social control over human dignity. What kind of community programs would enable us to respond to conflict with strategies of de-escalation, mediation and transformative justice instead of arrest, incarceration and surveillance?

CPT accompanies communities that resist state and corporate violence with nonviolence. We see these communities building cultures of nonviolence through education on decolonization and traditional healing practices. We see communities that cannot rely on police finding nonviolent ways to de-escalate crises. We know it is possible, over generations, to build communities that understand conflict as an opportunity for transformation. For those of us who live in North America especially, one of the most important witnesses for peace we can take is to advocate for our governments to defund violent policing and start funding initiatives that heal our communities.