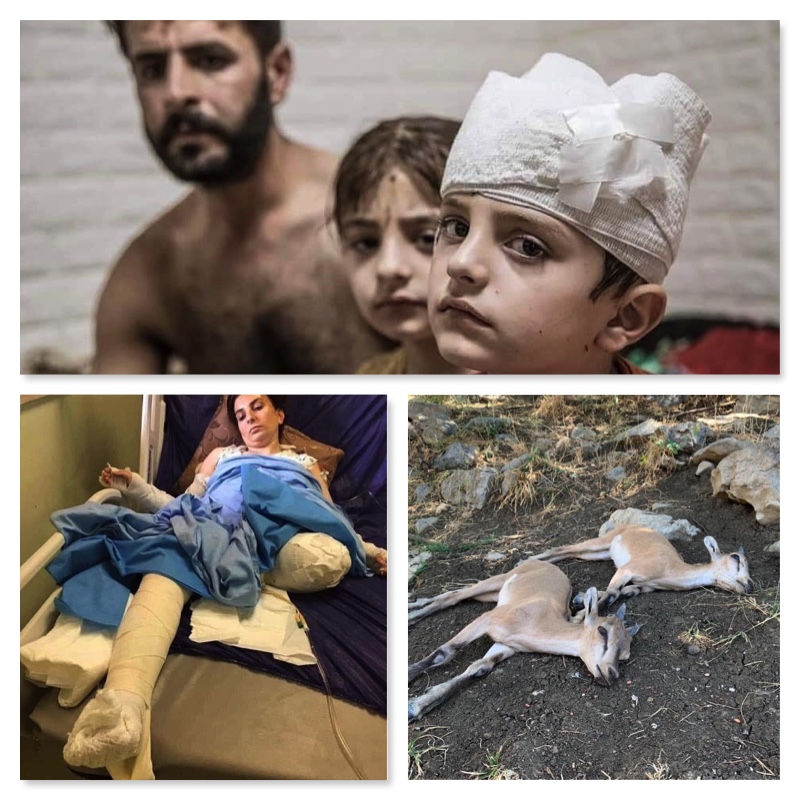 The family of Peyman Talib, who lost her leg, and and Keywan Kala, injured in a Turkish drone strike on 25 June 2020.  Photo: Rebaz Majeed  Deer who suffocated in forest fire caused by Turkish bombing (sent by a CPT-IK partner).

Pray that people in Iraqi Kurdistan may celebrate Eid al-Adha in peace. Pray for farmers, shepherds and small business owners who try to provide for their families in the midst of the pandemic while Turkish drones and soldiers target them. Pray for the end of Turkish military operations in Iraqi Kurdistan.

Peyman Talib, 31 years old, opened a grocery store at a riverside family picnic area a couple of months ago. The store was her dream as well as a means to sustain her family impacted by the pandemic. She was selling eggs to a customer when a Turkish drone bombed her store. The explosion burned her arms, broke her bones and severed one of her legs. The flying shrapnel and debris injured her husband Keywan Kawa, 30, and their two children, a 7-year-old girl and a 5-year-old boy.

Abas Maghdid, 30 years old, was providing for his family as a nomadic shepherd. He was making tea to stay awake in the middle of the night to care for his sheep when a Turkish bomb ended his life.

Families in Endze village were looking forward to celebrating Eid al-Adha as a community when Turkish bombs hit their village and caused damage to many homes and the village mosque.

In the midst of the economic crisis caused by the Covid-19 pandemic, the military of Turkey, a member of NATO, expanded its operations in the Kurdistan Region of Iraq. Since the middle of June, Turkish bombs and mortars have taken the lives of eight people, damaged village homes, killed animals and started fires around villages that burned forests, farmlands, orchards and beehives. The bombings put  thousands of families throughout the region, like the ones of Peyman and Abas, at risk.

Learn more about the families and join their call for peace.