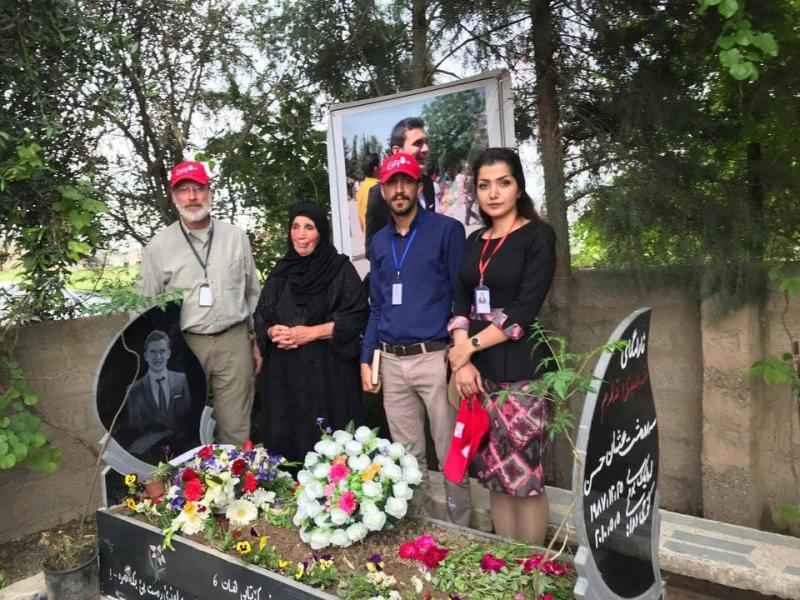 “We should talk as long as we are alive.  When my life ends, let my friends mark a period and start another sentence.”

The voice was Sardasht Osman, a 23-year-old Kurdish journalist and university student. Telling the truth compelled him to expose political corruption even though he received death threats. He was abducted at his university in Erbil, Iraqi Kurdistan, where he was in his final year of study. On 5 May 2010, his body was dumped along a street in Mosul.

A decade later, no one has faced charges for the murder of Sardasht Osman.  Most familiar with the political situation in Iraqi Kurdistan believe his death was the political killing of a journalist who dared to speak truth to power.

Osman articulated a journalist’s responsibility to tell the truth even at the risk of death. “When my life ends, let my friends mark a period,” Osman wrote; he then encouraged others to “start another sentence” and continue telling the truth.

Each 5 May, his family gathers at the graveside of their beloved son and brother, joined by friends and journalists to commemorate Sardasht Osman’s brief life and legacy.

On the first anniversary of Osman’s death, 5 May 2011, the CPT Iraqi Kurdistan team participated in this commemoration at the invitation of Kurdish journalist Niyaz Abdullah. On 5 May 2019, CPT again accompanied Niyaz Abdullah to honor Osman. CPT expressed sorrow for Osman’s death and called upon international media to investigate this case and expose the political oppression of journalists worldwide.

Niyaz Abdullah is fearlessly devoted to freedom of the press and also receives threats for telling the truth. Last year she was arrested and charged with contributing to an article critical of a leading Kurdish politician that she had no part in writing. Early this year, a Kurdish judge dismissed the charge against her for insufficient evidence.

In November 2019, Niyaz Abdullah organized a gathering of Kurdish journalists promoting freedom of the press. The journalists present acknowledged experiencing political oppression for seeking to tell the truth. They called for an end to the government’s distortion of the law that allows it to threaten journalists and undermine press freedom. “We are strong,” Niyaz Abdullah said, “but we need to be stronger. And we are much stronger together.”

Oppression of journalists and repression of press freedom is a global problem as well as a Kurdish reality.

In Iraq, journalist Ahmed Abed Al-Samad and photographer Safa’ Ghally were assassinated on 10 January, 2020. Six media members have been killed in Iraq in 2020, and many others have been threatened and arrested. Iraq ranks 162nd out of 180 countries on Reporters Without Borders’ World Press Freedom Index.

In the Philippines, the authorities arrested journalist Maria Ressa in February 2019, charging her with “cyberlibel” for an investigative story on a prominent businessman. A Manila judge found her guilty on 15 June 2020 and sentenced her up to 6 years in prison.  Most familiar with her case believe the charges against Ressa to be political revenge for her critical reporting on Philippine president Duterte’s authoritarian regime.

In Belarus, TV correspondent Alena Sharbinskaya was arrested on 10 August 2020. She was beaten so severely during three days in jail that she received medical treatment for severe internal injuries. She is one of 29 journalists brutalized by police out of 68 journalists detained in a week of protests that erupted against Belarus president Alexander Lukashenko, who has been president since 1994.

In Colombia, Indigenous radio journalist, Jose Abelardo Liz, was shot and killed on 13 August 2020, while recording the army’s forced removal of Nasa Indigenous people from their ancestral land. The military claims that a sugar company owns their land.

In the United States, British journalist Andrew Bunscombe, Chief U.S. correspondent for The Independent, was arrested and shackled on 1 July 2020, while covering the Black Lives Matter uprising in a Seattle police sweep of protesters. He repeatedly showed his press credentials and said he was a journalist. His arrest drew international media criticism over police violence against journalists covering protests following the police murder of George Floyd on 25 May 2020. As a result, The Independent founded the Journalism is Not a Crime Campaign.

Press Freedom Tracker documents violence against journalists covering the Black Lives Matter uprising in the United States. In three months, police or their allies attacked 184 journalists and arrested 59, with over 700 media members experiencing other aggressions.

Recently, the Iraqi Kurdistan government has arrested journalists in Erbil and Duhok.  It also shut down NRT TV for a few days in both cities and is suing NRT over coverage of Kurdish protests against the government. Journalists like Sardasht Osman and Niyaz Abdullah are not the enemy of the people, and they are not criminals. They are professionals committed to telling the truth and upholding freedom of the press as a cornerstone of democracy.

The CPT Iraqi Kurdistan team writes that the CPT mission statement includes “building partnerships to transform violence and oppression” with Niyaz Abdullah and other Kurdish independent journalists by accompanying them and amplifying their voices in Kurdistan, Iraq, and across the world.