Colombia: Soldiers from the Colombian Army rape an Indigenous girl 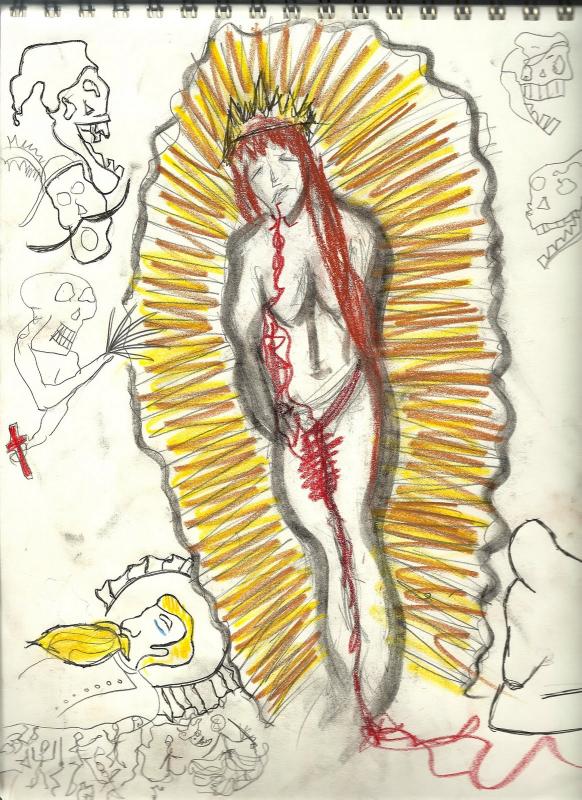 La Malinche, from the blog of Stephanie Monique, a Mexican Mestize woman

Colombia is in a state of shock after learning that seven soldiers from the National Army raped an 11-year-old Indigenous girl. The child is a member of the Embera Katio nation and lives in the Gitó Dokabú Reserve, located between Chocó and the West Andean Mountains. The public outcry against this case has called attention to other violations that took place in recent years, but have only now been made public. The sexual assault of a child is something that causes pain and rage in any circumstance. If this attack had been perpetrated by one member of the State Armed Forces it would have increased our anger. The fact that this rape has been carried out not by one, but by seven members of the Army takes the rage of the Colombian people to the limit. I argue that beyond the indignation caused by this terrible crime, this situation touches the most sensitive nerves of the nation because of our collective experience and history.

There is a connection between the Embera Katio girl that has been raped and the symbolical mother of all Mestiza people. This affirmation is based on the violent history of mestizaje. All mestizos are hijos de la chingada (children of the one that was fucked). The archetype of our mother is La Malinche, a Nahuatl woman who was abducted by the Spaniard invaders, used as an interpreter during the conquest of the Aztec Empire, and sexually abused by many members of that murderous party. On the other hand, the archetype of our father is the Spanish conquistador, a man emboldened by his military and technological prowess, even though his real strength was not his pretentious superiority, but his viruses. Our symbolic father does and undoes without any limit to his authority and responsibility. If it suits him, he recognizes his mestizo bastards, if not, he denies and abandons them. The Embera Katio girl— found drowning in her tears next to a creek—was forced to become La Llorona, another archetype like La Malinche. In Latin American mythology, La Llorona haunts the riverbanks with her laments, “Where are my children?”—the children that were taken from La Malinche by the conquistadores because an Indigenous mother was not good enough to raise the descendants of White Spanish Europeans. We, the mestizos, are the bastard children of the Spanish and the raped Indigenous woman, those that the Europeans did not want to accept. We are a people without identity because we do not know who we are, we do not dare to assume who we are, and in consequence, we do not know where we are going. We feel shame for our Indigenous mother and we search with anxiety for our father’s approval. We feel proud of our Spanish ancestry, which represents nothing more than an army of rapists. We pursue an unreachable whiteness, always trying to resemble that European father who rejected us, trying to speak his languages correctly, copy his culture and manners, participate in his economy, etc. Octavio Paz warned us many years ago that if we do not resolve our identity crisis, we will continue to be lost in the labyrinth of solitude.

The Embera Katio girl was raped by seven soldiers of the National Army, members of the Buitre (Vulture) Platoon II. I do not write with irony, that is the real name of the platoon. The vultures were tired of eating death carcasses and jumped in a flock over a girl who is just 11 years old. These soldiers are not very different from our symbolic fathers, those men that arrived from Europe more than 500 years ago. Both represent oppressive institutions, soldiers transformed into evil human beings by war, the invasion of indigenous territories, and their destructive mission. Both come from the impoverished classes of their respective nations, but instead of developing a class conscience that inspires them to improve the situation of all humankind, they have sold themselves to the powers that be, and they have used their force to oppress other human beings equally or even more dispossessed than they are: Indigenous, Afrocolombians, peasants, workers, students, etc. Paraphrasing Violeta Parra, “Arauco has a sorrow / darker than its waistcloth / it´s no longer the Spaniards / who make them cry / now it’s [Colombians] themselves / those who steal their bread.”

We are all wondering in a state of collective indignation what is going to happen to the soldiers. The Government that sends them to fight a war that is convenient only for those that profit with the armed conflict faces a dilemma. On one hand, the soldiers represent an important state institution, one that despite the rapes, extrajudicial executions or “falsos positivos,” killing of children, complicity with paramilitaries to enact massacres and forced displacements, association with drug cartels, illegal interceptions against the political opposition and critical journalists, execution of union leaders—among other illegal actions—continues receiving more than 13% of the national budget for 2020, the equivalent of 35,700,000,000,000 Colombian pesos (US $9,802,934,400,00).

On the other hand, the governing political party recently approved an initiative in Congress to modify the National Constitution in order to enforce life sentences. The original proposal was more severe, it sought to implement death sentences in cases of child rape and murder. I do not endorse this position, but if they were consistent they would be demanding life imprisonment or death sentences for the seven soldiers who raped the girl. This sentence has not been their answer. Everything seems to indicate that the Government and its political party are moving in opposing directions, but they are in fact complementary. The Government political party argues that the assault on the girl is all a hoax against the National Army, that the girl desired to be raped, that she was sold by her mother, and all kinds of vicious lies to excuse the Armed Forces. The President has performed a media show asking for a punishment that has not been regulated yet and, in consequence, is against the Constitution; while the Prosecutor has pressed charges for  “abusive carnal access,” not “violent carnal access,” against the rapist soldiers. As if it is not violent when seven armed men, who represent the state, gang-rape a child belonging to an Indigenous nation that has already been repeatedly targeted within the armed conflict by multiple actors, including the army.   The Government and its political party are trying to save the skin of the soldiers while preaching no tolerance for this kind of crime. Although I am convinced that they would not hesitate to sacrifice the seven “bad apples” to save the reputation of an institution that is itself the cause of the putrefaction that corrodes its members, not the other way around.

The Embera Katio people and other Indigenous nations in Colombia are not asking for life sentences for the seven rapist soldiers. That judicial profanity is the invention of a Government that seduces Colombian people with the color of blood, that has done everything in its power to sabotage any peace initiative, and intensify the war that we have suffered for more than seven decades. As Indigenous nations, the Embera Katio expect the respect of their sovereignty; they demand that the Government surrenders the seven soldiers to their Indigenous justice, which would judge and conduct a punishment and cleansing ritual in order to heal the wounds that this terrible act has left in the community. Once they have applied Indigenous justice, the rapists can be judged by the ordinary justice, hopefully with the same emphasis on healing that Indigenous people recognize as a necessary step to reconcile with life.

The Armed Forces and other illegal armed groups are not welcome in the Indigenous territories, just as the invading armies that took away their land starting with the Spanish conquest were not welcome. Non-Indigenous Colombians should be consistent with the Embera Katio’s approach to these armed forces and transform our indignation to support of the sovereignty of Indigenous nations.   That transformation could be a step towards reconciliation with our identity and towards finding a way out of our labyrinth of solitude.